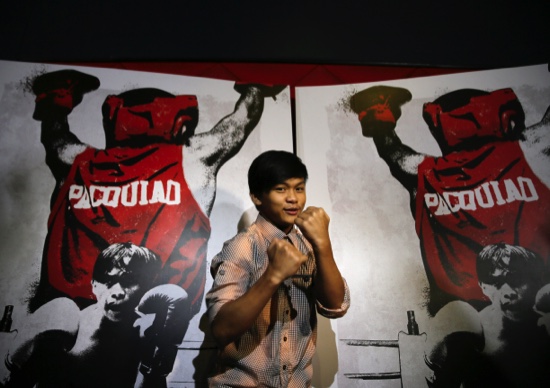 Filipino actor Buboy Villar, who plays the role of the young Manny Pacquiao, poses before the premiere showing of “Kid Kulafu”

As a dirt-poor rookie boxer in the southern Philippines, Manny Pacquiao started his phenomenal rise to global fame not as the Pacman, as he is sometimes called, but as “Kid Kulafu.”
That moniker — the title of a new local film about Pacquiao’s childhood — was taken from the label of a cheap wine whose empty bottles he returned for recycling to earn money to help his family.
“Kid Kulafu” opened yesterday in more than 70 theaters across the Philippines starting ahead of Pacquiao’s May 2 megafight with Floyd Mayweather. It will be shown in some U.S. and Canadian theaters beginning April 24.
Produced with advice and other assistance from Pacquiao, the film depicts the impoverished world he grew up in well before he became the world’s only eight-division boxing champion, one of its highest-paid athletes and the wealthiest member of the Philippine House of Representatives.
“He had every excuse in the book to fail — broken family, no food, no home, nowhere to go, no money, but he still persevered, and that’s what I want the people to see — that he is where he is today because of hard work,” filmmaker Paul Soriano told The Associated Press.
The 36-year-old boxer was born in a thatch-roofed house with a dirt floor in the mountains of southern Bukidnon province at a time when anti-communist militiamen were battling insurgents. One brutal clash near the Pacquiao home forced the family to move to General Santos city, into a shack owned by his uncle, Sardo Mejia.
There often was not enough food for the family; sometimes they ate boiled rice paired with fish entrails or corn on the cob. In the movie, militiamen compel Pacquiao’s mother to hand over two small fried fish she had prepared for her family.
Pacquiao’s father later abandoned the family, leaving Manny, the eldest of three brothers, to find a livelihood like most young boys in the country’s rural areas. He sold fried peanuts, bread and doughnuts made by his mother, and earned a little money of his own by gathering and selling tiny native lemons called calamansi. 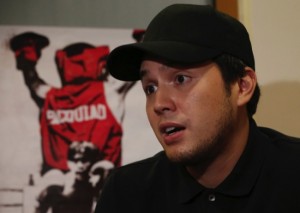 He also worked as a store assistant for Mejia, and collected sacks of empty bottles of Vino Kulafu, which he returned to the distributors to cash in the deposits. Kulafu was originally a Tarzan-like Filipino comic-book hero.
Pacquiao became drawn to boxing after he started watching Betamax tapes of world heavyweight fights with his uncle. Mejia encouraged Pacquiao to box and later trained him, though his mother hated the sport. She wanted her son to be a priest, but was too poor to enter him into a seminary. Still, she ingrained deep spirituality and religious faith in him.
Ironically, Pacquiao’s road to boxing was partially paved by his mother when she was struck by a heart attack, Soriano said. The movie depicts the boy entering a fight to win 100 pesos (about $2) needed to buy her medicine.
With training by his uncle and a friend’s father, Pacquiao soon became the amateur boxing derby champion in General Santos, fighting in the open-air ring in the town plaza as Kid Kulafu, a name Mejia came up with. Without telling his mother, he left General Santos to train in a dingy boxing gym in Manila.
“‘Kid Kulafu’ is really a movie about a young boy who grew up with nothing,” Soriano said. “All he really had was a dream and he fought and fought and fought until he made those dreams come true.”
The movie, with most scenes shot on location, was produced by Ten17P, an independent film company owned by Soriano, a director and producer who also has directed many of Pacquiao’s local television ads.
The 110-minute film was three years in the making, including two years of research and emotional interviews with Pacquiao, members of his family, friends and former trainers, Soriano said.
“It is a fairy-tale story, but it’s true,” producer Marie Pineda said.
The “rags” part of Pacquiao’s rags-to-riches story is all too familiar in the Philippines. Many Filipinos are born into poverty and forced to leave home to find work in Manila or even other countries to support their families. About 10 million Filipinos, a tenth of the population, work abroad and send money back home that helps shore up the economy.
The 17-year-old actor playing Pacquiao, Buboy Villar, also grew up poor with separated parents; he had to scavenge garbage heaps to earn money before becoming a child star in Philippine TV and movies.
While Villar shares Pacquiao’s humble beginnings, the boxing skills took more work: He spent weeks building up muscles and learning to move as a southpaw like the champion.
Soriano said the film takes some creative license to compress Pacquiao’s first 15 years, but is true to the boxer’s life. Pacquiao did not produce or invest in the film but helped in making it, facilitating interviews with key characters and going over the script while but giving Soriano creative freedom, the filmmaker said.
“I think, honestly, what he gave me — his time, his story — I think that was even much more important than any money,” Soriano said. “The access he gave me, the friendship that he has given me — that’s priceless.” Oliver Teves, Manila, AP