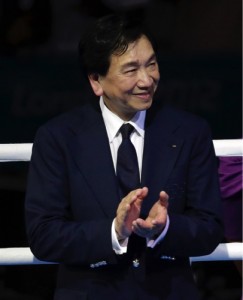 Wu Ching-Kuo, the president of amateur boxing’s governing body participates in a medal ceremony for women’s middleweight 75kg boxing at the 2012 Summer Olympics, in London

The new professional competition run by the previously amateur boxing world governing body is already showing signs of being a hit with fans.
The International Boxing Association’s AIBA Pro Boxing concept was launched last month with pre-ranking competitions which serve as a basis for selecting boxers to enter the world ranking events next month, and title bouts next year.
AIBA president CK Wu said the early signs were encouraging in terms of fan interest, and in creating a new pathway from the amateur level into a professional career for boxers who could also retain eligibility for events such as the Olympics.
The pre-ranking competitions have been held across Europe, Asia and into South America, and Wu says “the popularity you could not believe.”
“Wait another two months when we finish qualifying and we will have the title matches,” Wu added, “it will create incredible public interest.”
The AIBA Pro Boxing competition — following on from AIBA’s World Series of Boxing franchise competition — will sign chosen boxers to professional contracts, with initial signing bonuses of up to USD100,000. Despite being paid, the athletes will remain aligned with their national federations and will be allowed to compete at the World Championships, the Olympics and continental multi-sports competitions.
For the 2016 Olympics in Rio de Janeiro, 63 of the berths have been reserved for boxers from the APB competitions.
Wu said the APB concept was designed to prevent boxers being lost to the sport once they left the amateur ranks and did not meet quick success in the commercial world of professional boxing.
“We thought of how to protect boxers after they have finished their Olympic career,” Wu said in a telephone interview from Jeju, South Korea, ahead of the AIBA congress. “Some of them sign the contracts with professional ranks. If they don’t perform well, they lose their job. Very, very few are a success and most of them end their boxing career.”
The AIBA’s competition can also welcome back former amateur fighters who had already turned pro, providing they’re aged under 40 and have had no more than 20 professional bouts.
So while that ruled out the likes of Floyd Mayweather Jr. or Manny Pacquiao taking part, preventing the competition having the glamor of the sport’s big names, the APB had other features designed to entice fans.
The fighters will compete under their national flags, and the competition will have a transparent rankings system and schedule of bouts, making it different from the existing pro sanctioning organizations and ad-hoc commercially-driven decisions on which boxers meet.
Linked to this new competition is the removal of the previously sharp divisions between the amateur and professional boxing worlds. The AIBA events have adopted the ten-points-must scoring system, increased the number of rounds from three three-minute rounds to six and up to possibly 10 or 12 in title bouts, and done away with headgear for men’s ranks.
The decision to dispense with head guards was taken after a review by a medical panel which found that not wearing guards could reduce the amount of concussions and head injuries as fighters were not as reckless about taking blows to the head. Chris Lines
Sports Writer, AP