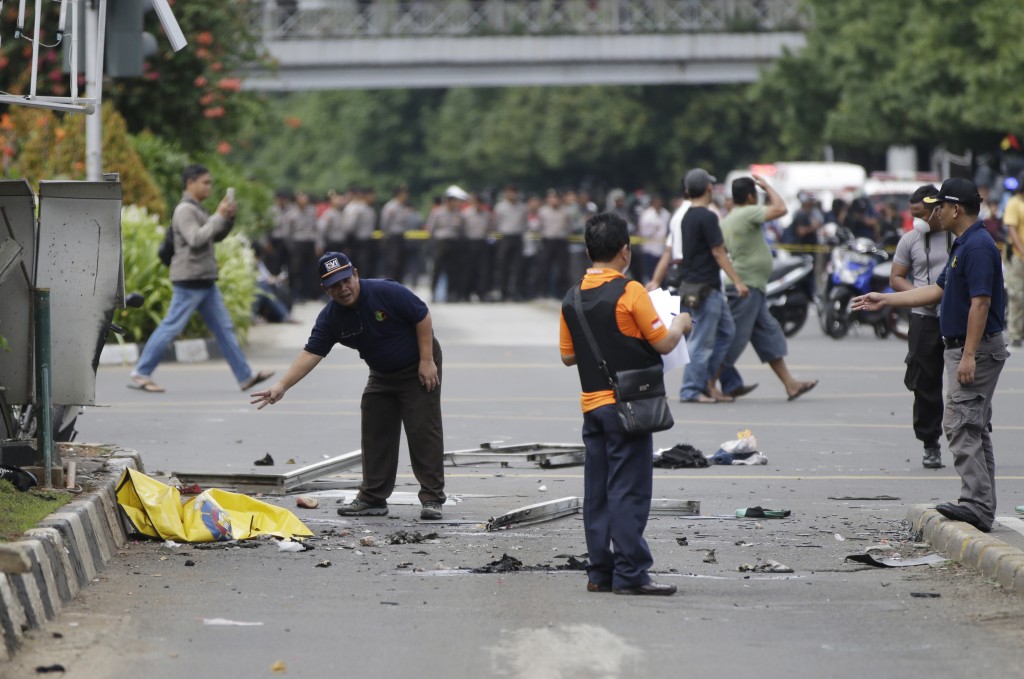 JAKARTA, Indonesia (AP) — Attackers set off explosions at a Starbucks cafe in a bustling shopping area in Indonesia’s capital and waged gunbattles with police today (Thursday), leaving bodies in the streets as office workers watched in terror from high-rise windows.

There were unconfirmed media reports of explosions in other parts of Jakarta.

Police said five of the attackers and two others were killed in the brazen attacks, which came after several warnings in recent weeks by the police that Islamic militants were planning something big. It was unclear if other perpetrators remained at large.

It was the first major violence in Indonesia’s capital since the 2009 bombings of two hotels that killed seven people and injured more than 50. Before that, a bombing in a nightclub on the resort island of Bali in 2002 killed 202 people, mostly foreigners.

No one has claimed responsibility for today’s attacks, which took place in front of the Sarinah shopping mall on Thamrin Street that prompted a security lockdown in central Jakarta and enhanced checks all over the crowded city of 10 million.

“This act is clearly aimed at disturbing public order and spreading terror among people,” President Joko “Jokowi” Widodo, said in statement on television. Jokowi, who is on a working visit in West Java town of Cirebon, said he is returning to Jakarta immediately.

“The state, the nation and the people should not be afraid of, and lose to, such terror acts,” he said.

Meanwhile, the Netherlands’ foreign minister says that a Dutch man has been seriously wounded in the Jakarta attack.

Foreign Minister Bert Koenders says the attack shows that “terrorism can hit everybody. Whether you are shopping in the heart of Paris, in a New York office or on vacation in Jakarta.”

A ministry spokeswoman says that the Dutch citizen was undergoing surgery. She spoke on condition of anonymity in line with ministry policy.

The ministry did not release the man’s identity.