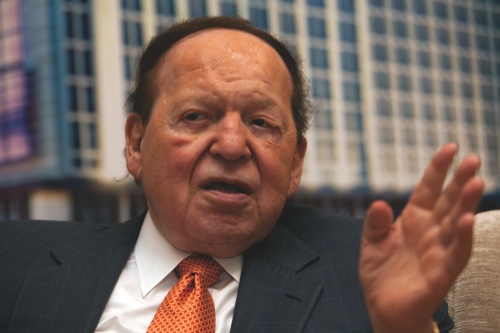 According to Bloomberg, Adelson will be appointed on March 6, with Las Vegas Sands COO Robert Goldstein as the interim president.

This change in management follows the retirement of former Sands China CEO Edward Tracy, who announced his departure last week.

Adelson, 81, was the first of U.S. casino magnates to move into Macau as its gaming industry took off with the opening of Sands Macao in 2004. Although 2014 gaming revenue contracted for the first time since Macau opened up to foreign casinos in 2002, following China’s anti-corruption campaign, Sands China has plans to open its fifth casino in Macau in late 2015.

Hong Kong based analyst at BNP Paribas told Bloomberg not to expect much strategic change, since Adelson has already been running the business strategy. Shengyong Goh, who used to work at Sands China, said this “would be more of re-aligning and getting Macau and Singapore to report directly to Vegas.”

Deutsche Bank analysts, quoted by The Wall Street Journal, are worried that the new appointment might set off a wave departures from the company.

Meanwhile, Sands China Ltd announced an interim dividend of HK$0.99 per share, a 13.8 per cent increase over last year’s interim dividend. A total of approximately HK$7.99 billion in capital will be returned to eligible shareholders through the dividend, expected to be paid on Feb. 27, 2015.

“Sands China is pleased to announce this interim dividend for its shareholders,” said Edward Tracy, President and Chief Executive Officer.

“2014 is a year of record earnings and a year of record service and quality awards. The combination of quantitative and qualitative achievements speaks to the strength of the integrated resort model and the teams that operate them,” the outgoing CEO stated in a press release from the company.