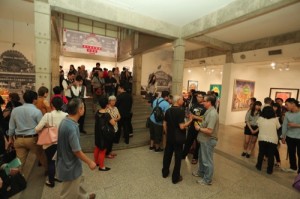 An exhibition celebrating the 15th anniversary of Macau’s handover to China being held at Tap Seac Gallery has been extended to 30 November. The National Day “pailou” (decorated arch) erected in Tap Seac Square will also be on display until the exhibition ends. The exhibition features 30 paintings by former “pailou” designers and members of the Macao Artists Society, in addition to valuable photos and models of National Day “pailou.” According to the Cultural Affairs Bureau, co-host of the event, the exhibition “offers a glimpse into those heady decades when impressive archways were erected across Macau to hail the achievements of the New China, welcoming younger people to appreciate and older people to revisit this unique local ‘pailou’ tradition.”  “A Retrospective Exhibition of Decorated Arches of Macau” is open from 10am to 7pm daily. Admission is free. 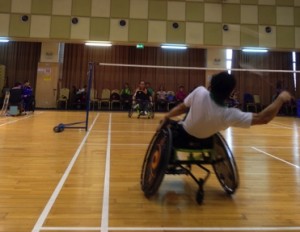 The 2014 Macau Persons with Disabilities Open took place on Sunday at the Centro Ngai Chon da Uniao Geral das Associacoes dos Moradores de Macau in Toi San. The Macau Paralympic Committee organized the event. Participants competed in various sports including table tennis, badminton and bocci. Apart from physically handicapped athletes, the organizer also invited deaf and speech-impaired people to participate in the event. The organizer believes that the Macau Persons with Disabilities Open has provided the participants with the chance to show off their sporting talents.