A 43-year-old man from Hong Kong has sustained a serious head injury after falling five meters from the Avenida Panorâmica do Lago Nam Van. The Public Security Police (PSP) received the report at around 12.30 a.m. yesterday. So far two witnesses have come forward, one of them a witness to the fall. PSP suspects that the man came to rest there after consuming alcohol. He was rushed unconscious to the Conde de S. Januário Hospital. PSP later received information from the hospital, suggesting that the man is still in intensive care, but that his condition is no longer life-threatening. 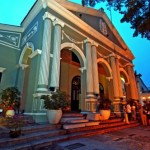 The D. Pedro V theatre will be partially closed until September 15 for security reasons, while the Cultural Affairs Bureau (IC) conducts maintenance and renovation works inside. Renovation work started yesterday and will likely be completed by September 15, the IC said in a statement. Both the garden and the Mirror Hall will remain open to the public while the work takes place.

The MSAR government is to organize commemorative activities on September 3, the Victory over Japan Day, which is designated by the Beijing government. The government spokesperson’s office released a statement yesterday, announcing that the commemorative event will be held at the Academy of Public Security Forces in Coloane at 9 a.m. Chief Executive Chui Sai On and main officials will attend. Details of the commemorative activity have not been provided in the statement. This year marks the 69th anniversary of the Chinese people’s victory over Japan in World War II.  The Standing Committee of the National People’s Congress decided in February that September 3 should be the annual commemorative day for the nation.

The Civic and Municipal Affairs Bureau Food Safety Centre has called on residents to stop consuming peanut butter, almond butter and other nut butter products produced by United States manufacturer nSpired Natural Foods. The products are marketed as a variety of different brands, including Arrowhead Mills, MaraNatha, Whole Foods 365, Trader Joe’s, Kroger and Safeway. nSpired has already announced a voluntary recall of these products, which are potentially contaminated with Salmonella. Information from the US authorities has shown that the products might have been sold in Hong Kong, though the Macau Food Safety Centre has not yet found any retailers in Macau selling these products. It has called on retailers and consumers not to continue the consumption of these imported products.