The number of e-permits in use soared to 200,000 in July, a total of four times higher than the 50,000 permits recorded in June. Mainland authorities have estimated that this growth will continue in the future. Guangdong authorities initiated the application process for e-permits to HK and Macau in May. Users have expressed the opinion that the system has improved efficiency at visa checkpoints, although Zhuhai immigration authorities told local television that 30 percent of e-permit holders don’t know how to correctly use the card. Checkpoints in Zhuhai have implemented various procedures in order to guide these users, such as rolling guidelines on LED screens and broadcast announcements. 117 e-channels have been put into use at the Gongbei border gate. The number of e-permits has now exceeded the total number of manual permits. 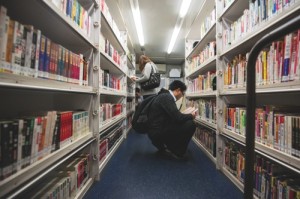 A travelling library launched by the Macau Central Library is set to provide services for those wishing to request and return books within the Seac Pai Van building complex. The program began yesterday and will be available each Wednesday between 1:30 p.m. and 6:30 p.m. in front of the block 4 entrance, at the Lok Kuan building. The Cultural Affairs Bureau has also announced that the Travelling Library, operating at Rua de Coimbra in Taipa, will only be open on Saturdays.

The Cultural Affairs Bureau (ICM) has announced that a restoration project will be carried out on the outdoor platform of the A-Ma Temple, beginning on August 16. The works will take 60 days, during which time all the halls of the Temple will be open to the public as usual. However, part of the outdoor area will be closed off section by section. Major construction projects include replacing the worn-out floors and adjusting the slope of the platform in order to improve the conditions of roads in rainy weather. In addition, the bureau will also conduct repairs on the decoration of some halls, and will clean the stone sculptures. The bureau and the temple managers have promised that these restoration works will have the least possible impact on residents for the duration of the project. They have also reminded residents and visitors to be careful and to follow instructions from the staff on site.