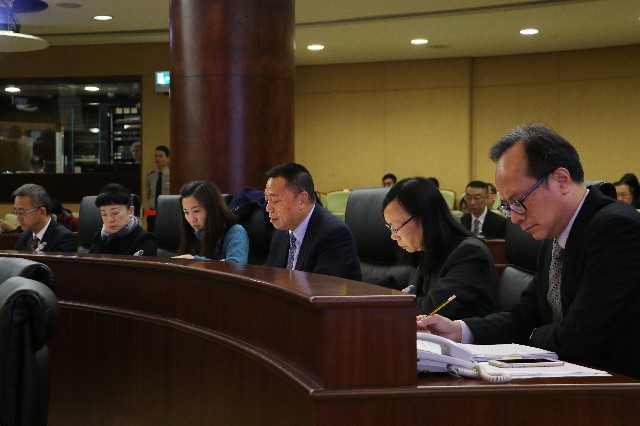 The budget for the ministerial conferences has nearly tripled from that of 2018, the Secretary for Economy and Finance Lionel Leong revealed yesterday while presenting the 2020 budget at the Legislative Assembly (AL) plenary.
The budget for several items has increased, including the budget for the 6th Ministerial Conference of the Forum of Economic and Trade Co-operation between China and Portuguese-speaking Countries, the budget for the Municipal Affairs Bureau (IAM), and the budget for the fourth Macau-Taipa bridge.
In 2018, the actual spending in the Ministerial Conference was 87 million patacas. In 2019, the budget was set to 130 millon patacas. In 2020, the budget nearly doubles that of 2019 and triples that of 2017, sitting at 231 million patacas.
“I think it [the increase] is quite unusual,” Ella Lei commented.
Lei wants the government to justify the increased budget for public fund invested companies such as Parafuturo de Macau Investment and Development Limited, whose Chief Executive Officer is lawmaker Chui Sai Peng.
In 2020, Macau will be administrated by new Chief Executive Ho Iat Seng. As Ho takes office, the number of civil servants will grow as well.
Currently, Macau has approximately 34,000 civil servants. This figure will increase to 38,128 in 2020.
Leong Sun Iok and Agnes Lam raised the same concern as Lei over the budget for the ministerial conference.
“How come the government needs 200 million to organize the ministerial conference?” Leong asked.
As pointed out by Agnes Lam, the budget for the fourth Macau-Taipa Bridge increased from current 8.6 billion to approximately 10 billion.
In reply to the lawmakers, Leong did not provide clear answers, expressing that government representatives will explain in details discussions to lawmakers in the AL Standing Committee.
That means that the government will only explain the Ministerial Conference budget increase during the closed meetings.
Concerning the fourth Macau-Taipa Bridge budget increase, another government representative explained that the proposed budget (10 billion) is the estimated amount given by a consultant company. The final spending on the bridge will depend on the outsourcing of projects related to the bridge.
The expenditure forecast was set at 100.689 billion patacas, a 2.6% decrease from 2019.
The Budget 2020 was approved with a positive balance of over 22 billion patacas ($2.75 billion).
The Government expects revenues from the Integrated Ordinary Budget to reach 122.697 billion patacas by 2020, up 0.3% from the year-end forecast, Leong said before the vote.
Forecasts for 2020 continue to demonstrate a local economy that is highly dependent on the gaming industry: The Government expects to collect 91 billion patacas in Special Gambling Tax, or around 74.5% of total revenues.
Secretary Leong said that gambling tax revenues for 2020 are “equivalent to those of 2019. This amount is the result of a calculation based on estimates of gross gambling annual revenues of 260 billion.”
The bill was passed in the first reading.