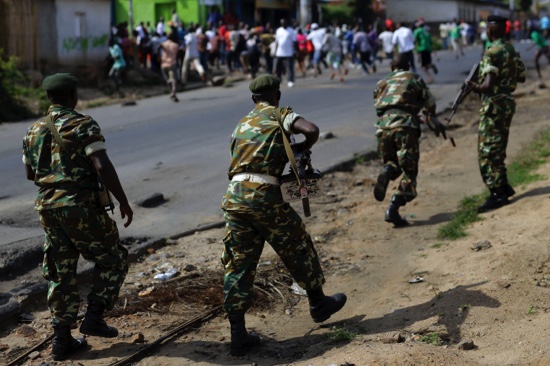 Army soldiers were deployed yesterday for the first time in Burundi to quell street protests, putting the military into a precarious position amid persistent demonstrations against the president’s bid for a third term.
A group of soldiers confronting hundreds of demonstrators almost opened fire on each other amid a dispute on whether to use lethal force against them, sharply illustrating the difficult position the military has been thrust into.
In an apparent effort to assert greater control over the military, President Pierre Nkurunziza fired his defense minister, Pontien Gaciyubenge, who earlier this month had said the army would play a neutral role in the street protests and respect the Constitution. Nkurunziza also replaced International Affairs Minister Laurent Kavakure and Trade Minister Marie Nizigiyimana, Presidential spokesman Gervais Abayeho said.
The protests began three weeks ago after the ruling party named Nkurunziza as its candidate in June elections. The situation grew even more volatile last week when a general announced a coup, which collapsed within two days. Police had tried to crush the protests at the cost of at least 15 lives, but since Nkurunziza returned to the presidential palace this weekend after loyalist troops overwhelmed the rebel faction, the army appears to have inherited the role of putting down the demonstrations.
In Bujumbura’s Musaga neighborhood, armed soldiers faced off with hundreds of angry protesters who called for Nkurunziza to reverse his decision to seek another term in office, which many say is unconstitutional.
An Associated Press reporter in Musaga, where protesters put up barricades of burning tires, saw two soldiers fire into a crowd of protesters, who had repeatedly shouted, “Shoot us.” No casualties were seen.
The soldiers who fired the shots were then ordered to leave the front line, sparking a rift between soldiers who opposed shooting at protesters and those who supported such action. Amid the standoff, the group opposed to shooting at protesters cocked their guns and threatened to shoot their colleagues if they fired into the crowd.
“The military is shooting at us, you have seen for yourselves,” said protester Alfred Nsengumukiza. “They came here pushing and shoving us and also doing the same to journalists, then they opened fire.”
No police were seen in Musaga and Cibitoke, a sign that the army, which previously had acted as a buffer between angry protesters and the police, has now taken over operations against demonstrators. The soldiers are armed with machine guns and rocket-propelled grenades.
Seventeen security officials, including five generals, accused in the attempted coup were charged Saturday with attempting to destabilize public institutions, said lawyers of some of the suspects. Maj. Gen. Godefroid Niyombare, the former intelligence chief who announced the coup on Wednesday, remains at large. AP