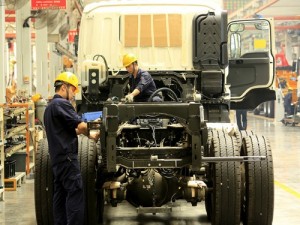 Beijing needs to speed up economic reform and curb the dominance of state companies or risk an economic slowdown and a possible crisis, the biggest European business group in China said yesterday.
The report by the European Chamber of Commerce in China adds to warnings that Beijing needs to open the state-dominated economy and not use regulation to promote growth of Chinese industry.
It comes while Chinese authorities are conducting a series of anti-monopoly investigations of global auto and technology brands that business groups say unfairly target foreign competitors. Premier Li Keqiang was quoted by the official Xinhua News Agency as telling attendees to a World Economic Forum in Tianjin that foreign companies only accounted for 10 percent of companies involved in recent anti-trust investigations and that no specific companies or industries were being targeted.
With economic growth slowing, China “needs a whole new era of reform,” said the chamber president, Joerg Wuttke. He said the pace of reform under President Xi Jinping has been “too slow and cautious.”
Beijing’s economic overhaul plan announced in 2013 plan calls for making China’s economy more productive by opening more industries to private and foreign competition. But at the same time Beijing is trying to create “national champions” in fields from autos to telecoms to aerospace. Political analysts say the most ambitious reforms might also have been hampered by resistance from state industry and its allies in the ruling party.
Beijing has announced a steady drumbeat of regulatory changes including plans to allow privately owned banks. But it has yet to make significant changes in the role of state companies that dominate industries from oil to telecommunications to insurance and that reform boosters say are a drag on growth.
China’s economy grew by 7.5 percent in the three months ended in June, but that was barely half of 2007’s 14.2 percent rate. Beijing is trying to steer the economy to growth based on domestic consumption instead of exports and investment. But analysts say the latest growth was achieved only because of stimulus spending.
The European chamber, which represents 1,800 companies, appealed for changes including opening more industries such as banking and health care to private competition. It called on the government to make regulation more even handed and predictable.
Without faster action, “the commitment of foreign business to China may start to wane and, at worst, the economy could be headed for crisis,” said the European chamber’s report.
It said European companies have reduced investment plans and are looking at other Asian economies as more profitable possible destinations.
The chamber expressed concern last month about the anti-monopoly investigations. It said it received reports companies were pressured by regulators to accept penalties without a full hearing and avoid involving their governments.
Yesterday, Wuttke said the group had asked to talk to Chinese regulators about the complaints but were unable to obtain a meeting. Joe McDonald, Business Writer, Beijing, AP

Foreign companies are the target of 10 percent of China’s anti-monopoly probes, Premier Li Keqiang said yesterday, rebutting allegations the investment climate has worsened and the government is singling out overseas firms.
The numbers show China isn’t targeting specific enterprises, Li told foreign executives in Tianjin yesterday. His remarks, made ahead of the World Economic Forum’s “New Champions” meeting in the northern Chinese city, were posted online by the official Xinhua News Agency.
“What we’re promoting includes antitrust investigations being conducted according to the law, in a transparent and fair manner,” Li said, according to the Xinhua transcript.
With his remarks, Li became the highest-ranking official to address concerns raised by American and European business groups that foreign firms face the brunt of antitrust scrutiny. Companies including Microsoft, Qualcomm and Danone have been the subject of probes, while record fines were meted out to Japanese auto parts makers last month.