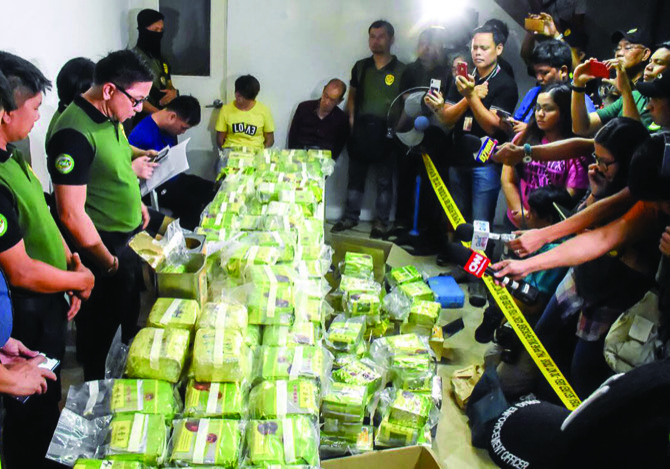 Philippine authorities said yesterday that they have seized methamphetamine concealed in tea wrappers and biscuit cans in their second-largest drug haul this year in a sign of how the problem has persisted despite the president’s bloody anti- drug crackdown.

Three Chinese nationals and a Chinese-Filipino interpreter were arrested late Tuesday in “buy-bust” raids in an upscale residential enclave and outside a shopping mall in Alabang village in the Manila metropolis, said Philippine Drug Enforcement Agency chief Aaron Aquino.

The drugs, with a street value of USD20.7 million, were concealed similarly to seizures in Malaysia, Thailand and Myanmar, indicating an international drug syndicate was behind the trafficking, Aquino said.

Aquino has called for the return of the death penalty in the Philippines for drug traffickers, better security along the archipelago’s extensive coastlines and more extensive databases of foreign drug suspects for the immigration bureau to deter drug trafficking. Corruption also fosters the drug menace, he said.

“There are those who have been detained for drug offenses, for example, in China but they could still enter our country. We have arrested many of those identified foreign offenders here,” Aquino told The Associated Press by telephone.

“The Chinese will never stop putting up drug laboratories because, firstly, there is no death penalty, and secondly, they can buy anybody,” Aquino said. “They can buy judges, they can buy prosecutors and eventually they can go home safely.”

Aquino has also sought legislation to make it easier to criminally charge owners of plush residences, condominium units and buildings, where he said drug traffickers have shifted their bases from more public areas and rural warehouses that have been raided by law enforcers. Tuesday’s drug raid targeted a house that the Chinese suspects rented in posh part of Alabang village where prominent lawmakers, politicians and business executives live under tighter security.

President Rodrigo Duterte has elevated drugs to a national security concern and launched a crackdown that has killed more than 5,000 mostly poor drug suspects in reported clashes with the police since he took office in mid-2016.

The killings have alarmed Western governments, U.N. human rights experts and rights groups and sparked two complaints for crimes against humanity, which are being examined by the International Criminal Court.

Duterte’s move to withdraw the Philippines from the tribunal supposedly took effect on Sunday, but its prosecutor said she would continue examining the complaints.

Duterte has denied condoning extrajudicial killings but has openly threatened drug traffickers with death. Last week, he drew fresh criticisms when he publicly named 46 government officials, including three congressmen, he alleged were involved in illegal drugs but have not been criminally charged.

Critics have warned him against making such public announcements without solid evidence but Duterte said he trusted the government agencies that provided the information. Several of the politicians he named denied they were involved in the drug trade.Jim Gomez, Manila, AP