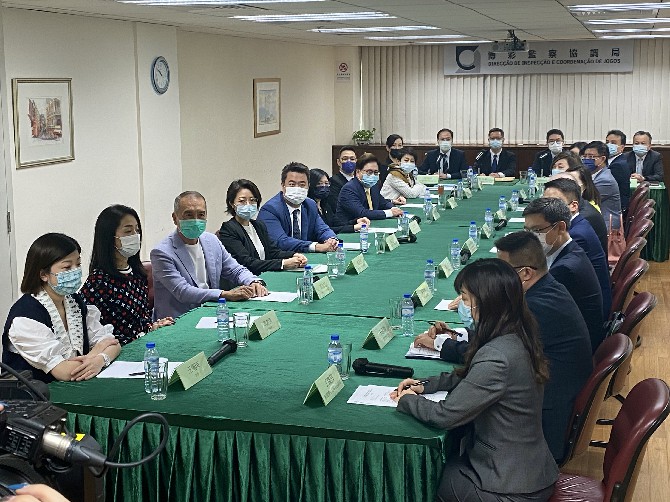 The Electoral Affairs Commission for the Legislative Assembly Election (CAEAL) has said that what matters to classify a media report as electoral propaganda, is whether that report constitutes an appeal to vote. Content related to the political program of a certain list or group is also of relevance to deciding the acceptability of the material, the president of the CAEAL, Tong Hio Fong, said yesterday during a press briefing at the sidelines of a meeting between the CAEAL and representatives from the gaming concessionaires.
According to Tong, “the [elections] law defines clearly what [constitutes] a news report and what [constitutes] electoral propaganda.”
In response to media questions, the president of CAEAL added that it is important to observe the content of candidate interviews, he claimed, saying, “If it is just a news report there is no problem, but if in the report, there is the intention to call attention to a particular candidate/list or to call for the vote [for] this candidate or, to incentivize citizens not to vote [for] another candidate, in this case, this is considered propaganda.”
Under focus is a rule stipulated by the CAEAL that calls for the removal of all electoral propaganda materials after the period of the electoral campaign, and especially during the days of voting and reflection.
On a previous occasion, the remarks from CAEAL were not well received among journalists and media outlets, who interpreted the restriction as a threat to press freedom.
In response to questions as to how to navigate the problem of having news reports that will touch on political programs and ideas of a certain candidate or candidates, Tong said, “If the report is made with fairness and equity and includes all candidates, in that case, [it] cannot be considered that the report is favoring just one or some of them.”
In addition to media concerns was the responsibility of the journalists or media outlets when a citizen shares previously published reports, during the period in which electoral campaigning is not allowed. On this topic, Tong clarified that in such cases, there is no liability of the media or journalists but, instead, this falls on the citizen.
In a recent letter published by the Times, the Macau Journalists Association (MJA) expressed shock at the interpretations made by the CAEAL regarding the duties of media.
In the letter, the MJA claimed that a previous statement from Tong misinterpreted news as electoral propaganda.
The association also claims that there is no such provision stating that media outlets need to hide or delete any election-related news on their online platforms before reflection days and voting day, and commented the restriction is creating “white terror” for media professionals.
The CAEAL noted in a statement on Tuesday evening that what the Committee requires to be concealed the day before and on election day, only refers to “information with specific references [to] electoral propaganda, which may be disseminated by the media on its online platforms, and not those republished or shared, indirectly, by social media platforms.”
In the aforementioned meeting with the gaming concessionaires, the president of CAEAL informed media that topics related to the rules during the electoral campaign and voting day were addressed. He had reminded the concessionaires that besides complying with the rule of not having any election campaign activities held on their premises, they also have to supervise and alert the CAEAL in case others, including their staff members, attempted to disseminate electoral propaganda, by any means, including the displaying of symbols, slogans or numbers that point to a list or lists of candidates.
Questioned as to whether the gaming concessionaires could or could not provide transportation or facilitate the voting of their staff or other citizens, Tong said, “If it is just transportation or some arrangements, there is no problem, but if there are any propaganda materials or if there is any attempt to [influence] a voting direction during the trip, this is also considered to be a breach of the electoral law” and would carry consequences.