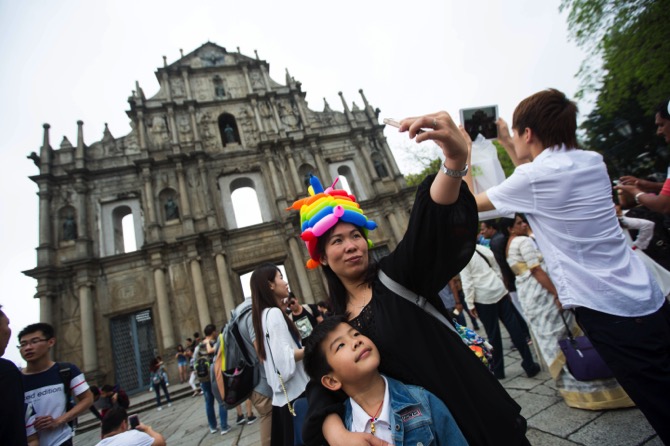 The forecast number of visitor arrivals in Macau in 2025 is predicted to reach 38  to 40 million, based on the average annual rate of three to five percent increases, according to the “Tourism Development Master Plan” that is under public consultation between May 23 and July 22.
Commenting on the possibility of Macau reaching 40 million tourists per year, experts contacted by the Times say local authorities should learn how to give tourists a quality experience while managing a vast number of visitors in a small city.
As the draft plan suggests, tourism should grow in a sustainable way; tourism products should be diverse; a high-value visitor market should be developed; and the quality of tourism services should be improved. Indeed, local scholars stressed the importance of utilizing vacant but historical places in the city.
Eve Ren, an assistant professor at the Institute for Tourism Studies (IFT), told the Times that the visiting experience tourists get during peak seasons is “terrible,” adding that it’s extremely difficult to get through tourist attractions.
“But a lot of places like near the bay, like the Science Museum, are not so fully occupied […] I think the capacity management could be better done to accommodate this much of increase,” she told the Times yesterday.
The scholar stressed that the main problem in managing the tourists in the city is that travel agencies are “too concentrated” on a similar number of places, mentioning the Ruins of St. Paul, the surrounding central area and the A-Ma Temple.
According to Eve Ren, local heritage sites could be “better” in terms of attracting visitors. She also suggested that the city should have an easier transportation access for tourists, as they are reluctant to take public buses due to their limited knowledge on bus routes.
As several of the attractions in Macau are small in scale, Ren said that the heritage in the region are “too scattered,” so guidance is needed. “How can we integrate them together?” she asked. “If we solely rely on travel agencies, it’s a bit problematic because a lot of people come here without the arrangement of travel agencies.”
The scholar also added that the region is in need of “clean, low budget and convenient” hotels for tourists as most tourists are not willing to pay “that much” for a night’s stay. “We’re targeting mass tourist. They’re not willing to pay high cost […] So do we have this type of accommodation? We have a few but the quality is a lot of question,” she said.
A visiting assistant professor at IFT Penny Wan, also emphasized the importance of setting up new attractions, entertainment and activities if the city is aiming for an increase in its visitor arrivals.
“Macau needs capacity management,” Wan said, mentioning that most of the tourists visit during the public holidays in China and measures are needed to avoid that an influx of visitors at the same time.
Similarly to Ren, Wan believes there are several heritage sites in Macau that are “untouched and unvisited” mainly due to the lack of “facilitation network.”
While tourists are flocking to the same heritage places, Francisco Vizeu Pinheiro, a local architect and a professor at IFT, stressed that there are different spaces that can accommodate the increase of visitors.
“There are many unused sites like the old Iec Long fireworks factory.  (…) Other places and facilities could be adapted for citizens and tourist use. For example some government facilities that have historical and heritage value could be open to the public, like the Nam Van Lake shores, now without coffee shops or bars,” he pointed out. “A seaside board walk could connect the jetfoil terminal, Fisherman Wharf, Science Center, Kun Ian statue, Nam Van Lakes. These areas are now walled and isolated. Many Portuguese houses at Coronel Mesquita Avenue can be adapted and open to the public,” Vizeu Pinheiro adds.
Moreover he added that the city may have a “Venice Syndrome,” i.e., “making life impossible for citizens as historical centers are becoming a big shopping center;” if the government fails to conduct a “proper planning” on how to cater an enormous number of tourists coming to the region. Staff reporter