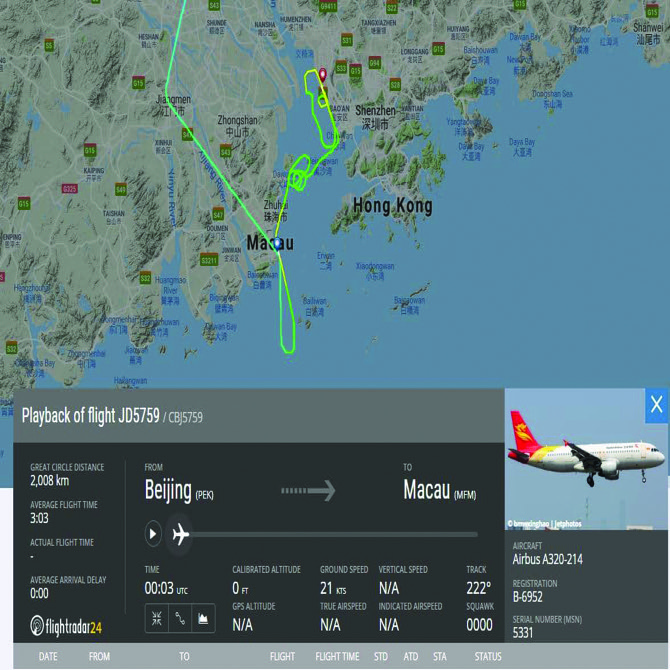 This screenshot, courtesy of Flightradar24, shows the flight path of JD5759, from the approach to Macau to the decision to land at Shenzhen Bao’an International Airport

The Civil Aviation Authority of Macao (AACM) published yesterday its final report on the investigation into an incident in August last year, when a Beijing Capital Airlines aircraft aborted a landing over the Macau International Airport. It eventually made an emergency landing at Shenzhen Bao’an International Airport.

According to the AACM report, the flight, JD5759, which was headed to Macau from Beijing, encountered “severe low-level wind shear at the runway with rapid tailwind increase and downdraft tendency, that led to the reduction of airspeed and lift, resulting in the higher-than-usual vertical acceleration at the touchdown.” In other words, the aircraft dropped down suddenly during the later stage of the landing.

As a result of this “uncontrolled” descent, all landing gears touched down at almost the same time, resulting in damages to the nose landing gear.

After the failed landing attempt, the pilots performed a “go-around” in order to attempt a second landing but “the thrust lever of the right engine was erroneously moved to the idle position triggering the stall warning twice,” according to the report.

The flight was diverted to Shenzhen Bao’an International Airport where the aircraft finally landed safely.
In addition to the erroneous moving of the right engine to idle position, the report points out that the Macau airport “does not have equipment to detect low-level wind shear.”

Besides the factors which contributed to the incident, the report also listed safety recommendations for both the airport and the airline in order to prevent similar occurrences in the future.

The airport “should determine the necessity to install appropriate equipment to detect hazardous weather conditions,” as well as “review and amend the current operation procedures on the FOD (Foreign Object Debris) presence on the runway, including the need to conduct mandatory runway inspections.”

In the last of the recommendations made to the airport, the AACM noted that the airport “should assess the need to install automatic equipment to detect FOD on the runway.”

The airline should “incorporate ground and simulator sessions on bounce identification and bounce recovery in the training for the flight crew,” as well as “enhance pilot training to ensure that in case of a need to perform key changes to critical flight controls/systems, necessary cross-checks should be performed between the pilots before such changes are made.”

The incident involved a total of 166 people, including crew members and passengers on board, and resulted in five minor contusions during evacuation procedures at the Shenzhen airport. None of the injured required medical treatment.