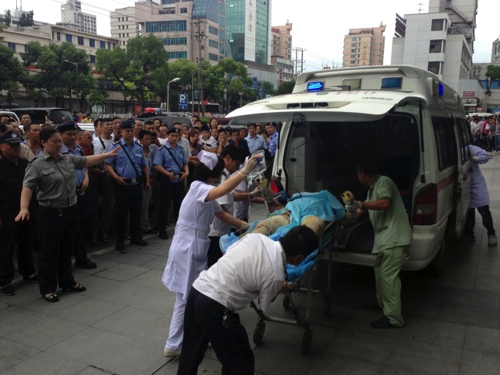 Medical staff move a severely burnt victim of an explosion at an eastern Chinese automotive parts factory from a hospital in the city of Kunshan, Jiangsu Province to a Shanghai hospital

A suspected dust explosion at an automotive parts factory in eastern China that supplies General Motors killed at least 69 people and injured more than 180 others, state media reported yesterday, again highlighting workplace safety that remains a concern.
It was China’s most serious industrial disaster since a fire at a poultry plant killed 119 people in June last year.
Saturday morning’s explosion occurred when more than 200 workers were on the site of the factory, which is in an industrial zone in the city of Kunshan, officials from the city said at a news conference. Kunshan, in Jiangsu province, is about 1,000 kilometers southeast of Beijing.
State broadcaster CCTV showed footage of large plumes of thick, black smoke rising from the plant, and news websites posted photos of the dead or injured lifted onto the back of large trucks, their bodies black, presumably from burns or soot.
The explosion occurred at 7:37 a.m. at a workshop in the factory, which polishes wheel hubs. Rescuers pulled out 44 bodies at the site, while 25 other people died at a hospital, officials said. At least 187 people were injured.
More than 120 of the injured were sent to hospitals in Kunshan and the nearby city of Suzhou. Burn experts from a Shanghai hospital arrived in Kunshan to help, the official Xinhua News Agency reported.
A preliminary investigation showed that the blast was likely a dust explosion, Xinhua said. Chinese newspapers reported yesterday that workers at the factory had complained over the past years about dangerous levels of dust and inadequate cleaning practices in the facility.
A dust explosion is caused by the fast combustion of particles suspended in air in an enclosed space. The particles could include dust or powdered metals such as aluminum. They would have to come into contact with a spark, such as fire, an overheated surface or electrical discharge from machinery.
Such dust explosions have been blamed for other deadly fires. In 2012, a dust explosion in an aluminum lock polishing workshop in the eastern Chinese city of Wenzhou killed 13 people and injured another 15. Three years earlier, aluminum powder exploded in an abandoned factory being rented out as temporary housing in the city of Danyang, killing 11 people and injuring another 20.
The factory is operated by the Kunshan Zhongrong Metal Products Company, which according to its website was set up in 1998 and has registered capital of USD8.8 million. Its core business is electroplating aluminum alloy wheel hubs, and it supplies GM and other companies, the website said.
In a statement, GM confirmed that Zhongrong is part of its network of suppliers. “We can confirm Zhongrong is a supplier to GM’s global supplier Dicastal,” the statement said.
Police took away five senior Zhongrong executives to assist in the investigation, officials said, without providing details.
A woman who answered the main phone line at the Zhongrong metal company said it is a Taiwanese enterprise. She refused to give her name, any other information or the contact numbers of company staffers handling the case.
Workplace safety is a major problem in China, where safety regulations are often ignored and enforcement can be lax. In June 2013, 119 workers were killed when a fire raced through a chicken processing room at a poultry plant in the northern province of Jilin. The fire appeared to have been sparked by an explosion caused by leaking ammonia, officials said.
Sixty-two people were killed and scores injured in the eastern port city of Qingdao in November when a pipeline exploded. Investigators said the blast was caused by sparks from a jackhammer being used to repair a manhole cover following an oil leak. AP 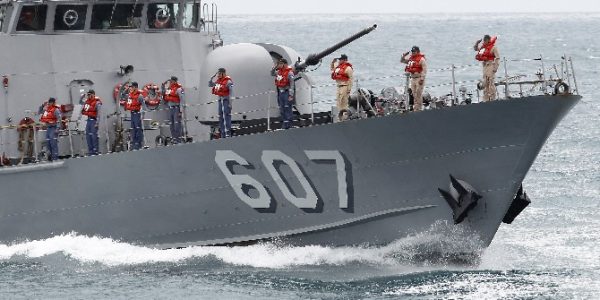