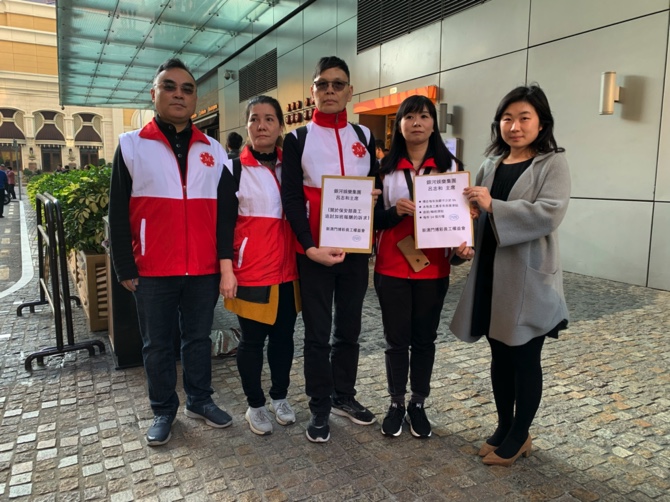 The protest was organized by the New Macau Gaming Staff Rights Association, led by Cloee Chao, who stressed her association was acting in the interest of all gambling industry staff, including security guards and janitors.

Organizers said that 500 workers attended the demonstration, while the police put their number closer to 300.

Chao is calling for a 14-month salary payment and a guaranteed 5% annual pay raise to keep ahead of inflation. According to official records, the annual inflation rate measured 3% in 2018, the last year for which full data is available.

The workers’ representative said that casino profits have grown significantly in the past three years, while workers have received a pay raise of just 2.5% per year.

Her association also demands shorter working hours, an expansion of annual leave allowance and a housing subsidy currently in place for non-local workers to be expanded to the resident workforce too.

The range of benefits demanded by the casino workers include many that are currently enjoyed by civil servants, though not all.

The six gaming operators are not regarded as public entities. However, recent court rulings found that casino operators could be considered quasi-governmental entities, because of their concessionaire status.

A more industry-specific demand raised yesterday concerns the use of computer-assisted gambling tables, which some of the protesters consider potentially harmful. According to Chao, these tables are colloquially known as “radiation tables”.

They consist of electronic transmitters installed under tables, which can detect the amount of bets and calculate the corresponding pay. In this way, they serve to prevent chip fraud and other casino theft.

Chao said her association has received complaints filed by members about feeling unwell after working at the tables for lengthy periods. She is calling for the technology will be withdrawn to ensure the health of casino croupiers.

The Macau Gaming Inspection and Coordination Bureau (DICJ) has reassured workers of the safety of the technology. The DICJ provided Chao’s association with three reports compiled by entities in the mainland, Hong Kong and Singapore, which approved the use of the technology.

Not fully convinced, Chao explained that some Las Vegas casinos formerly put such tables into practice but later withdrew them. She stressed that “Chinese people should not be put at risk to become guinea pigs.”

With regards to working hours, the association leader said that casino workers should be entitled to work no more than five days a week. According to Chao, many countries and regions have this restriction in place. She stressed a similar policy was adopted in mainland China in 1995.

The association also considers the 48-hour work week too long, and is calling for the number of annual leave days for all casino workers to be extended to 22 days per year.

The workers’ representative accused casino operators of asking employees to sign contracts wherein they voluntarily waive their right to certain subsidies. Chao is calling for an end to this “legal loophole.”