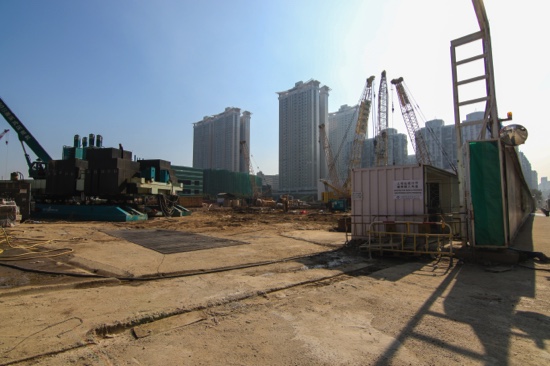 The Chief Executive (CE) said yesterday that the government is treating the case involving the housing complex “Pearl Horizon” as highly important. He stressed that the government must abide by the law, and that all solutions for the case must strictly follow the existing legal framework.
Chui Sai On noted that the concessionaire company has already announced its intention to proceed to the courts, and that the MSAR will face the process with the predefined proposals and the legal justifications already presented.
The statement came during yesterday’s morning charity walk, in which the CE participated.
Chui Sai On said that authorities were giving high attention to both the case and the rights of the buyers investing in the building under construction. In addition to creating a group that includes the Secretariats for Administration and Justice, for Economy and Finance and for Transport and Public Works, he instructed a legal team to study this case as well.
The CE also revealed that, in the resolution of this case, independent views from the Public Prosecution Office (MP) and from the Commission Against Corruption (CCAC) had come to light. These opinions included the feasibility of the case to be set as one of public interest, and it was in light of all these opinions and pieces of advice that the government came to the current decision.
“The MSAR is a place where the rule of law is an essential value, and rigorous law enforcement is the basic principle for its governance.” The higher official recalled, “The government tried all possibilities within the law, but that overlap the law merely by an incident,” he added.
Regarding the fact that Polytec, the land concessionary, was to appeal the decision, the CE added that “using legal methods and institutions for resolving disputes is also a crucial value for Macau, corresponding to the principles of equality and justice.” He recalled that the government also has experience in resolving legal cases, and he therefore believes that the government’s decisions and its legal justifications will prevail.
Also speaking on the sidelines of the same charity walk, the Secretary for Transport and Public Works, Raimundo do Rosário, said that that the government is currently focusing on improving issues related to housing and transport. He said that, in the future, Macau will also strengthen its work in the area of ​​environmental protection.
Mr Rosário welcomed all constructive criticism and suggestions, stressing that the government works towards a single goal, which is in the best interests of the Macau SAR’s development.
Questioned about his priorities, the secretary said he plans to focus on housing and traffic issues, but acknowledged that these are very difficult jobs. Mr Rosário revealed that although the road network was unchanged, during the first eleven months of this year there was a monthly increase of about 620 vehicles, which demonstrates that traffic is not an easy issue to address.
Regarding another of his priorities, the Secretary revealed his hope that in the next two years the government can improve its work in environmental protection.