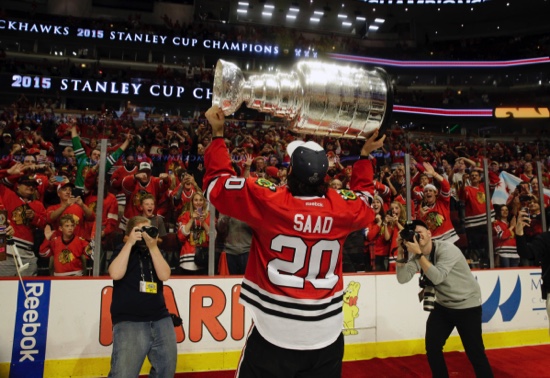 The Chicago Blackhawks won their third NHL Stanley Cup in six years by beating Tampa Bay 2-0 on Monday (US time) to take the series 4 games to 2. Patrick Kane and Duncan Keith scored and this time Chicago
clinched the title at home —
something it last did in 1938 — to enable the party to begin immediately.
“We won it for each other, for the city,” Blackhawks captain Jonathan Toews said. “In so many ways, winning a championship like this in our home city, it really transcends the sport. Everyone wants to be a part of it. It’s amazing.”
Keith, the Blackhawks’ iron man directed a dominant defense that shut down Tampa Bay’s high-scoring attack and also gave Chicago a 1-0 lead when he knocked in his own rebound with 2:47 left in the second period.
Kane made it 2-0 in the third when he scored on a one-time shot on a three-on-two rush with 5:13 left in the game — his first goal of the series. It was the first time in the final that either team had a two-goal lead.
Goaltender Corey Crawford, who was pulled from the first-
round playoff series against Nashville before re-establishing himself as first-choice goalie, had 25 saves in his fifth career playoff shutout.
Keith was a unanimous selection for the Conn Smythe Trophy for playoff MVP after he finished with 21 points while playing over 700 minutes in a grueling postseason.
“It feels so great. You want to keep being a part of these things,” Keith said. “You don’t get these awards without being on great teams with great players. I’m just proud to be a part of this group of guys who cares so much and do whatever it takes.”
It was an appropriate conclusion to a series full of near misses and close calls that had fans in Chicago and Tampa Bay on the edge of their seats for almost two weeks. It was only the second final to begin with five one-goal games, and no team enjoyed a two-goal advantage until an open Kane buried a perfect pass from Brad Richards at 14:46 of the third.
It was Kane’s first goal of the series, and it touched off a wild celebration by the frenzied crowd of 22,424.
“I’d say you have a dynasty,” NHL Commissioner Gary Bettman told the cheering crowd as he presented the trophy to the grinning Blackhawks.
Ben Bishop kept the Lightning in the game with 30 saves, fighting through some sort of lower-
body injury that kept him out of Game 4. Led by Bishop and big defenseman Victor Hedman, the Lightning allowed just 13 goals in the series, but it wasn’t enough against the unflappable Blackhawks.
“Our goal scoring dried up. It wasn’t for lack of trying,” coach Jon Cooper said. “The chances, posts, missed nets, open nets that hit sticks, you need those to go in for you to keep going. Ultimately they dried up for us.”
Tampa Bay star Steven Stamkos finished the playoffs with an eight-game scoring drought that likely will haunt him into the offseason. He rung the inside of the crossbar on a near miss at 7:50 of the first and was stoned by Crawford on a breakaway 58 seconds into the middle period.
“It’s so frustrating especially for me not being able to get the job done these last couple games,” Stamkos said. “That’s something you’re going to remember for a long time.”
The pair of missed opportunities for one of the NHL’s most gifted scorers was made costly when the Blackhawks got on the board in the second.
Keith got a nice pass from Kane in the middle and shot it around Tampa Bay center Cedric Paquette. Bishop stopped his first try, but Keith kept skating past Paquette and flipped in the rebound at 17:13.
It was the first Stanley Cup for Kimmo Timonen, who has said he plans to retire. The 40-year-
old Finnish defenseman was acquired in a trade with Philadelphia in February after he missed the start of the season while recovering from blood clots in his leg and lungs.
After captain Jonathan Toews got the trophy from NHL Commissioner Gary Bettman, he handed it right to Timonen, who proudly hoisted it into the air.
“I leave this game as a Stanley Cup champion. I can’t ask for anything more than that,” Timonen said. Andrew Seligman, Chicago, AP