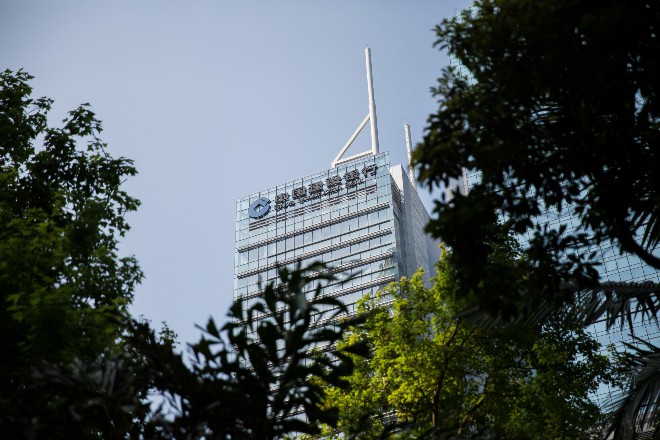 China’s largest state-run banks operating in Hong Kong are taking tentative steps to comply with U.S. sanctions imposed on officials in the city, seeking to safeguard their access to crucial dollar funding and overseas networks.
Major lenders with operations in the U.S. including Bank of China Ltd., China Construction Bank Corp., and China Merchants Bank Co. have turned cautious on opening new accounts for the 11 sanctioned officials, including Hong Kong Chief Executive Carrie Lam, according to people familiar with the matter. At least one bank has suspended such activity.
At some lenders transactions via the U.S. are banned, while compliance must now review and sign off on others that would previously have been immediately processed, the people said.
Foreign lenders like Citigroup Inc. have taken steps to suspend accounts or are increasing scrutiny of Hong Kong clients.
Such measures underscore the ability of the U.S. to use the greenback’s dominance in international transactions as a pressure point in the intensifying standoff with China. China’s state-owned lenders need to preserve their access to global financial markets, particularly at a time when Beijing is leaning on them to prop up the economy from the fallout of the coronavirus.
China’s four largest banks had $1.1 trillion in dollar funding at the end of 2019, according to Bloomberg Intelligence.
Representatives at Bank of China and Construction Bank didn’t respond to requests seeking comments. China Merchants Bank declined to comment. The Hong Kong government didn’t immediately respond to a request for comment.
U.S. President Donald Trump last week sanctioned Chinese and Hong Kong officials including Lam, Xia Baolong, director of the Hong Kong and Macau Affairs Office of China’s State Council, and Chris Tang, commissioner of the city’s police for their role in implementing a security law in Hong Kong. The officials will have property and assets in the U.S. frozen.
The sanctions forbid banks from doing business with the penalized individuals or risk penalties that would threaten their access to the U.S. financial system.
China on Monday retaliated by sanctioning 11 individuals including U.S. senators Marco Rubio and Ted Cruz, but stopped short of putting any senior American government officials on its list. Its top diplomat, Yang Jiechi, on Friday said the door for talks with the U.S. remains open.
It didn’t clarify the potential implications for any financial institutions that keep doing businesses with those named.
“China’s position on the U.S. sanctions is clear and consistent,” Foreign Ministry spokesman Zhao Lijian told reporters in Beijing yesterday in response to a question about the banks’ move to comply. “The U.S. sanctions are irrational and groundless. They are unanimously opposed and condemned by all Chinese people, including our residents in Hong Kong.”
Bank of China had the biggest exposure to U.S. dollars among its local peers, followed by Industrial & Commercial Bank of China Ltd., the world’s largest bank. The lenders have been expanding their presence globally over the past decade by adding branches, making acquisitions and granting loans to fund everything from local power plants to toll roads.
Meanwhile, local banks in Hong Kong are concerned as well since they all have some U.S. dealings such as foreign exchange and settlement, one person said.
The Hong Kong Monetary Authority, the city’s de facto central bank, sought to ease concerns on Saturday, saying lenders in the city have no obligation to follow U.S. sanctions under local law, urging banks to treat customers fairly in assessing whether to continue to providing services.
Despite the announcement, “banks that have U.S. operations or conduct dollar businesses may still need to consider their U.S. compliance obligations,” JPMorgan Chase & Co.’s Hong Kong-based analysts led by Katherine Lei wrote in a note. “Risks for listed China banks are relatively muted, in our view, as the four China officials on the list may obtain banking services with local unlisted Chinese banks that do not have dollar or U.S. businesses.” Bloomberg