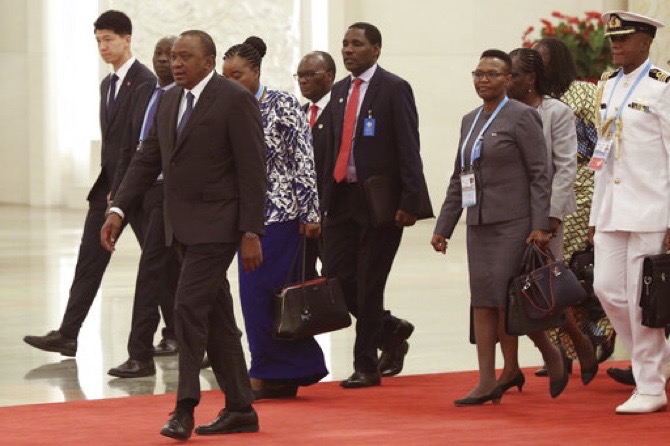 Developing nations have welcomed the initiative to increase trade by building ports and other facilities in a region the Asian Development Bank says needs USD26 trillion of investment by 2030 to keep economies growing. But countries including Malaysia and Thailand have canceled or scaled back projects due to high costs, while some others are struggling to repay Chinese loans.

Beijing will pursue “stable and sustainable financing,” said the finance minister, Liu Kun, at an event held ahead of today’s start of the second Belt and Road Forum.

This week’s conference brings together leaders or envoys from three dozen countries including Malaysia, Indonesia, Serbia, Myanmar and Kenya.

Police and paramilitary troops patrolled Beijing streets and subway stations. Major traffic arteries in the city of 22 million people are due to be closed for official motorcades.

Asian and African leaders are expected to press Beijing to reduce financing costs for Belt and Road projects. That might inject a note of tension into one of China’s highest-profile political events this year.

Most Belt and Road projects are built by Chinese state-owned companies and are paid for with loans from government banks at commercial interest rates.

Chinese lenders have provided $440 billion in financing, according to the country’s central bank governor, Yi Gang, who spoke at the event with Liu. He gave no details of how much has been repaid or how much is deemed to be at risk of possible default.

In addition, some 500 billion yuan ($75 billion) has been raised in Chinese bond markets, according to Yi, who spoke at the event with Liu.

On Wednesday, Ethiopia announced Beijing had forgiven interest owed through the end of 2018 on Belt and Road loans to the northeast African country.

But Xi’s initiative is gradually winning wider support despite worries in the United States, Russia, Japan and India that China is trying to expand its strategic influence at their expense.

In March, Italy became the first member of the Group of Seven major economies, which includes the United States, to sign an agreement to support Belt and Road.

Chinese officials say they are examining borrowers more carefully to ensure they can repay loans.

Possibly due to that, the number of new Belt and Road projects has plunged.

The total value of new contracts fell 42 percent in the first half of 2018 compared with a year earlier, according to Moody’s. AP