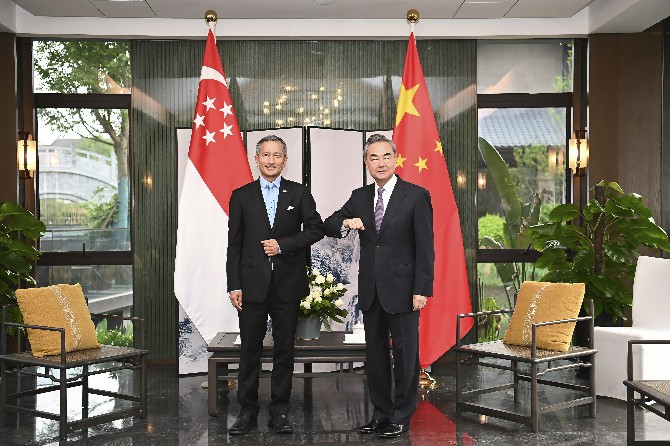 Chinese Foreign Minister Wang Yi is meeting with counterparts from four Southeast Asian countries this week as Beijing seeks to expand its influence in the region amid a sharp downturn in relations with Washington.
Talks with Singapore’s Vivian Balakrishnan, Malaysia’s Hishammuddin Hussein, Indonesian’s Retno Marsudi and Teodoro Locsin of the Philippines are being held over three days in the southern city of Nanping in Fujian province.
The official Xinhua News Agency said yesterday that Wang told Balakrishnan that China wants to strengthen strategic communication and make joint efforts to maintain regional peace and stability.
The two countries should work together to oppose vaccine nationalism, Xinhua quoted Wang as saying.
He also referred to the ongoing turmoil in Myanmar, telling Balakrishnan that China supports the Association of Southeast Asian Nations in upholding the principle of non-interference in other countries’ internal affairs and in helping to restore stability in Myanmar in the ASEAN way, Xinhua said.
China has sought to prevent the ASEAN bloc from taking a unified stand on China’s claims to virtually the entire South China Sea, where it has territorial disputes with several Southeast Asian countries.
The Philippines demanded Wednesday the removal of more than 250 Chinese boats it has spotted near six islands and reefs in the disputed waters.
Chinese Foreign Ministry spokesperson Hua Chunying responded yesterday that Whitsun Reef, where the vessels were first spotted more than a week ago, has long been a place for Chinese fishing boats to shelter from rough waters, and that it is normal for them to do so.
“We know that there are some forces that keep trying to drive a wedge between China and the Philippines by all means,” she said. “We hope the Philippines will be able to tell right from wrong and not be misled.”
After wrapping up his meetings with his Southeast Asian counterparts today, Wang is to meet South Korean Foreign Minister Chung Eui-yong in the southern port of Xiamen on Saturday amid tensions over North Korea, which relies on Chinese economic and political support. MDT/AP