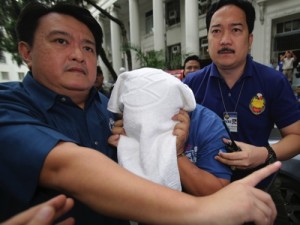 National Bureau of Investigation agents secure alleged USAFE group leader Grandeur Pepito Guerrero, center, who planned to set off firebombs at Manila’s international airport and a major shopping mall, as he arrives for inquest proceedings at the Department of Justice in Manila

China has warned its citizens not to travel to the Philippines after a Chinese teenager who worked in a family-run store was kidnapped and after government agents arrested a group of men who said they planned to attack the Chinese embassy in Manila.
“Given that the safety situation in the Philippines is deteriorating, the consular service of the foreign ministry is asking Chinese nationals not to travel to the Philippines for the time being,” the Chinese Foreign Ministry said Friday.
The warning comes as relations between the countries have soured and even turned hostile in recent years as Beijing and Manila battle over claims to the same territory in the South China Sea.
Philippine government agents arrested three men on Sept. 1 at Manila’s airport and found the four gas-filled plastic bottles and an old pistol in their car at a parking lot. The agents said the men planned to ignite one bottle at a parking lot restroom and the three others at a shopping mall and also had a plan to “strafe” the Chinese embassy.
The Philippine military, however, has played down the supposed threat coming from these men, describing them as “pranksters” who did not belong to any of the known terrorist groups in the country.
In a separate incident late Thursday, 18-year-
old Li Peizhi was seized by unidentified gunmen in Zamboanga Sibugay province’s Kabasalan township, Senior Inspector Leo Castillo said. The gunmen also took 20,000 pesos (USD455) from the store’s cash register.
Castillo, the provincial police spokesman, said officers in pursuit found the kidnappers’ vehicle burning in a village about two kilometers away.
Mayor George Cainglet said Abu Sayyaf militants who kidnapped Australian Warren Richard Rodwell in 2011 may have been involved. He said no ransom demand had been made. AP