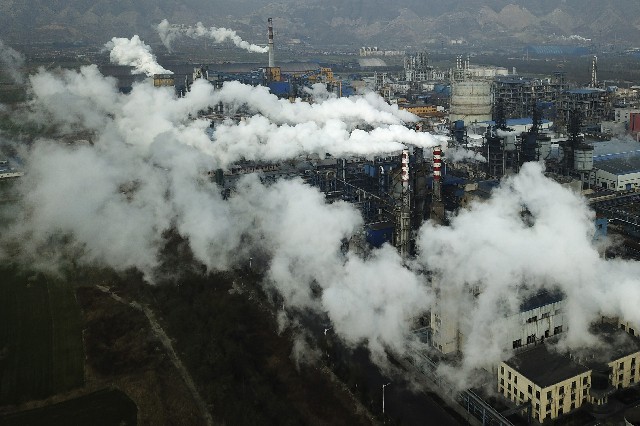 As world leaders gather in Spain to discuss how to slow the warming of the planet, a spotlight falls on China — the top emitter of greenhouse gases.
China burns about half the coal used globally each year. Between 2000 and 2018, its annual carbon emissions nearly tripled, and it now accounts for about 30% of the world’s total. Yet it’s also the leading market for solar panels, wind turbines and electric vehicles, and it manufactures about two-thirds of solar cells installed worldwide.
“We are witnessing many contradictions in China’s energy development,” said Kevin Tu, a Beijing-based fellow with the Center on Global Energy Policy at Columbia University. “It’s the largest coal market and the largest clean energy market in the world.”
That apparent paradox is possible because of the sheer scale of China’s energy demands.
But as China’s economy slows to the lowest level in a quarter century — around 6% growth, according to government statistics — policymakers are doubling down on support for coal and other heavy industries, the traditional backbones of China’s energy system and economy. At the same time, the country is reducing subsidies for renewable energy.
At the annual United Nations climate summit, this year in Madrid, government representatives will put the finishing touches on implementing the 2015 Paris Agreement, which set a goal to limit future warming to 1.5 to 2 degrees Celsius above pre-industrial levels. Nations may decide for themselves how to achieve it.
China had previously committed to shifting its energy mix to 20% renewables, including nuclear and hydroelectric energy. Climate experts generally agree that the initial targets pledged in Paris will not be enough to reach the goal, and next year nations are required to articulate more ambitious targets.
Hopes that China would offer to do much more are fading.
Recent media reports and satellite images suggest that China is building or planning to complete new coal power plants with total capacity of 148 gigawatts — nearly equal to the entire coal-power capacity of the European Union within the next few years, according to an analysis by Global Energy Monitor, a San Francisco-based nonprofit.
Meanwhile, investment in China’s renewable energy dropped almost 40 percent in the first half of 2019 compared with the same period last year, according to Bloomberg New Energy Finance, a research organization. The government slashed subsidies for solar energy.
Last week in Beijing, China’s vice minister of ecology and environment told reporters that non-fossil-fuel sources already account for 14.3% of the country’s energy mix. He did not indicate that China would embrace more stringent targets soon.
“We are still faced with challenges of developing our economy, improving people’s livelihood,” Zhao Yingmin said.
As a fast-growing economy, it was always inevitable that China’s energy demands would climb steeply. The only question was whether the country could power a sufficiently large portion of its economy with renewables to curb emissions growth.
Many observers took hope from a brief dip in China’s carbon emissions between 2014 and 2016. Today the country’s renewed focus on coal comes as a disappointment.
“Now there’s a sense that rather than being a leader, China is the one that is out of step,” said Lauri Myllyvirta, lead analyst at the Centre for Research on Energy and Clean Air in Helsinki. He notes that several developed countries — including Germany, South Korea and the United States — are rapidly reducing their reliance on coal power. AP