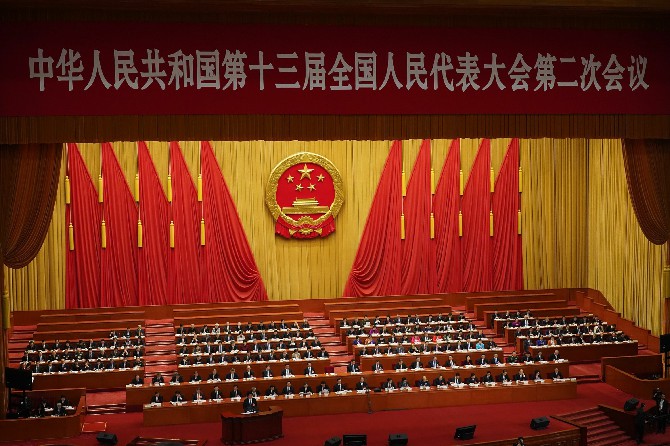 China is considering holding its highest-profile annual political meeting in late May, according to people familiar with the matter, after it was postponed for the first time in decades amid the coronavirus pandemic.
The gathering of China’s legislature, the National People’s Congress, usually runs for about two weeks in Beijing and is attended by President Xi Jinping and other top leaders. At least one set of dates being considered is May 23-30, according to the people, who asked not to be identified. That would be shorter than normal.
The Chinese People’s Political Consultative Conference, an advisory body whose annual meeting is held in conjunction with the NPC, will gather from May 21 to May 27, two Hong Kong broadcasters reported over the weekend, citing unnamed sources. The NPC Standing Committee, which is set to meet in Beijing April 26-29, will decide the final date to convene the legislature, they added.
The spokesperson’s office of the NPC Standing Committee didn’t immediately respond to faxed questions.
China uses the meeting to unveil its annual economic targets, defense spending projections and other key policy decisions or changes. This year’s economic target announcement will be closely watched after the pandemic pushed China’s economy into its first contraction in decades in the first quarter, with GDP shrinking 6.8% from a year ago. The economy is expected to expand 3% in 2020, according to a Bloomberg survey of economists.
China’s top leaders softened their tone on the importance of reaching specific growth targets this year during the latest Politburo meeting on April 17, saying the nation is facing “unprecedented” economic difficulty and signaling that more stimulus was in the works. A higher GDP target would suggest more stimulus measures to come, while a lower target would suggest authorities are going to be conservative about stimulus.
The gathering holds greater symbolic importance this year in showing that China is getting back to normal following the outbreak, even as much of the U.S. and Europe remains on lockdown. The country has 82,788 confirmed coronavirus cases, as global infections top 2.5 million.
Some 3,000 members of the NPC had been expected to convene in early March for the meetings. They were delayed in February by the Standing Committee as the government fought to contain the virus, which emerged in Hubei province late last year.
This year, the NPC is also expected to deliberate on a draft Civil Code, consisting of sections on property, contracts, personality rights, marriage and family, inheritance and torts. Bloomerg