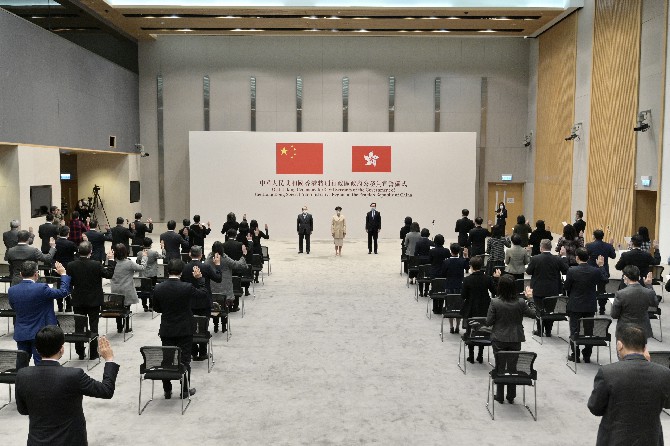 Hong Kong and Macau Affairs Office of the State Council recently commended civil servants in the Hong Kong Special Administrative Region (HKSAR) who have taken oath or signed declaration, pledging to uphold the HKSAR Basic Law and bear allegiance to the HKSAR.
The HKSAR government has, in accordance with relevant laws, completed the arrangement for civil servants to take oath or sign declaration, while the HKSAR Legislative Council (LegCo) has adopted the Public Offices (Candidacy and Taking Up Offices) (Miscellaneous Amendments) Bill 2021, said a spokesperson for the office.
This marks the establishment and implementation of a systematic oath-taking system in the HKSAR that covers civil servants at all levels and departments, including the chief executive, LegCo members, judges and District Council members.
Hong Kong’s civil servants not only serve Hong Kong residents, but also shoulder the responsibilities of safeguarding the national sovereignty, security and development interests, as well as Hong Kong’s long-term prosperity and stability, the spokesperson said.
Improving the oath-taking system of civil servants strengthened the political principle that Hong Kong must be governed by patriots, the spokesperson said.
So far, a total of 170,000 civil servants in the HKSAR have signed declaration or taken oaths, said the spokesperson.
This fully shows that the majority of Hong Kong’s civil servants support the policy of “One country, two systems,” abide by the constitutional order of the HKSAR, safeguard the authority of the Constitution and the HKSAR Basic Law, and are willing to serve Hong Kong residents and work hard for Hong Kong’s long-term prosperity and stability, the spokesperson noted.
It is hoped that Hong Kong’s civil servants will keep their promises, carry out their duties, and work for a brighter future of Hong Kong. MDT/Xinhua