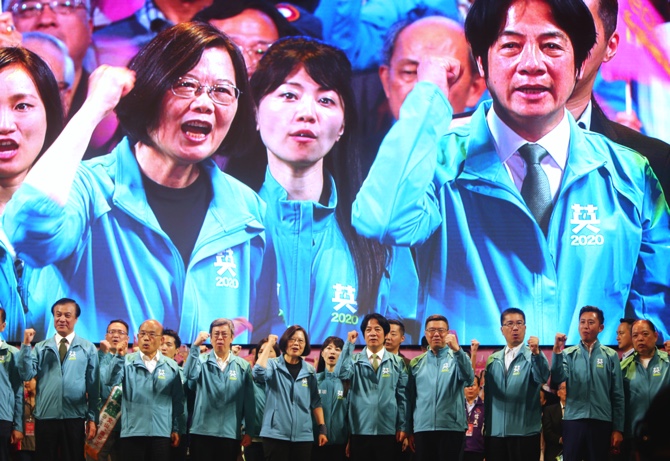 A Chinese aircraft carrier fleet passed near Taiwan yesterday, prompting the self-governing island to scramble ships and jets to monitor the situation.

Taiwan’s defense ministry said the southbound Chinese fleet passed into the Taiwan Strait but stayed on China’s side of the waterway that separates the island from China.

The ministry said Taiwan scrambled ships and jets to monitor the fleet.

U.S. and Japanese ships were also following the Chinese fleet, the ministry said without giving details.

China has passed aircraft carriers into the strait since Taiwan President Tsai lng-wen took office in 2016. China resents Tsai for declining to see Taiwan and China as parts of the same country and resents her improved relations with Washington.

“We ask that our citizens not worry,” the defense ministry said in a statement via social media.

The last voyage through the strait by a Chinese aircraft carrier was in June.

“It has strong implications, especially for Japan and Taiwan, that China will conduct a regular patrol in this region,” said Andrew Yang, secretary-general of the Chinese Council of Advanced Policy Studies in Taiwan.

“Taiwan would need to reinforce its asymmetric defense capabilities so as to deter the ongoing Chinese military upgrades,” Yang said.

Asymmetric defense refers to use of strategy or unconventional arms to hold back an enemy with more overall strength. China has the world’s third-largest armed forces compared to Taiwan at No. 22, as ranked by the GlobalFirePower.com database.

The Taiwan Strait is a heavily trafficked waterway, but China pays special attention to activity there by foreign navies. A U.S. cruiser passed through the Taiwan Strait on Nov. 12, the U.S. Navy said in a tweet. That passage was the ninth so far this year for the United States, Taiwan’s government-run Central News Agency reported.

China has condemned previous U.S. voyages in the Taiwan Strait as meddling in the China-Taiwan issue. The second carrier is probably aimed to deterring U.S. “intervention”, Yang said.

The presidential office in Taipei sent a statement yesterday asking China to “cherish” “peace and stability” with Taiwan and elsewhere in the region.

The fleet seen was escorting China’s first entirely home-built aircraft carrier, the ministry statement said. It had sailed from a shipyard in northern China where it was being constructed. Work on the homegrown vessel began in 2013, the Chinese defense ministry website says.

China and Taiwan have been separately ruled since the Chinese civil war of the 1940s, when Chiang Kai-shek’s Nationalists lost to the Communists and rebased their government on the island 160 kilometers away. RALPH JENNINGS, TAIPEI, AP