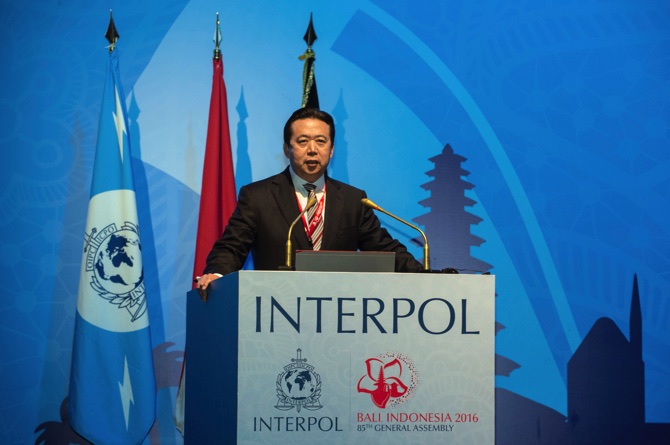 A top Chinese police official was elected president of Interpol yesterday, setting off alarm bells among rights advocates over abuses and a lack of transparency within China’s legal system, as well as the potential misuse of the police organization to attack Beijing’s political opponents.

Vice Public Security Minister Meng Hongwei was named as the first Chinese to hold the post at the organization’s general assembly on the Indonesian island of Bali, Interpol announced in a press release.

The Lyon, France-based International Criminal Police Organization has 190 member nations and has the power to issue “red notices.” It’s the closest instrument to an international arrest warrant in use today. Interpol circulates those notices to member countries listing people who are wanted for extradition.

While Interpol’s charter officially bars it from undertaking “any intervention or activities of a political, military, religious or racial character,” critics say some governments, primarily Russia and Iran, have abused the system to harass and detain opponents of their regimes. Interpol says it has a special vetting process to prevent that from happening.

Quoted in the Interpol release, Meng said he takes over at a time when the world is facing some of the most serious global public security challenges since World War II.

“Interpol, guided by the best set of principles and mechanisms to date, has made a significant contribution to promoting international police cooperation,” Meng was quoted as saying. “Interpol should continue to adhere to these principles and strategies, while further innovating our work mechanisms in order to adapt to the changing security situation we see today.”

Interpol’s president is a largely symbolic but still influential figure who heads its executive committee responsible for providing guidance and direction and implementing decisions made by its general assembly. Interpol Secretary General Jurgen Stock is the organization’s chief full-time official and heads the executive committee.

Meng, who takes over from Mireille Ballestrazzi of France for a four-year term, will assume his new duties immediately.

His election comes as Chinese President Xi Jinping is seeking to give new momentum to his 4-year-old campaign against corruption, including a push to seek the return of former officials and other suspects who had fled abroad. China filed a list of 100 of its most-wanted suspects with Interpol in April 2014, about one third of whom have since been repatriated to face justice at home.

The anti-corruption drive is led by the Communist Party’s internal watchdog body, the highly secretive Central Commission for Discipline Inspection, rather than the police, prompting questions about its transparency and fairness.

More than 1 million officials have been handed punishments ranging from lengthy prison terms to administrative demerits or demotions. While authorities deny their targets are selected for political purposes, several of the highest-profile suspects have been associated with Xi’s predecessor Hu Jintao and other rivals.

China’s police and judicial systems have been routinely criticized for abuses, including confessions under torture, arbitrary travel bans and the disappearance and detention without charges of political dissidents and their family members. That has prompted reluctance among many Western nations to sign extradition treaties with China or return suspects wanted for non-violent crimes.

China also stands accused of abducting independent book sellers who published tomes on sensitive political topics from Hong Kong and Thailand. U.S. officials have meanwhile complained that China has asked for the return of corruption suspects while providing little or no information about the allegations against them.

“While we think it’s important to fight corruption, the campaign has been politicized and undermines judicial independence,” Wang said. Meng’s election “will probably embolden and encourage abuses in the system,” she said, citing recent reports of close Chinese ally Russia’s use of Interpol to attack President Vladimir Putin’s political opponents.

Nicholas Bequelin, Amnesty International’s regional director for East Asia, tweeted: “This is extraordinarily worrying given China’s longstanding practice of trying to use Interpol to arrest dissidents and refugees abroad.”

At the same time, China’s 3-decade-old economic boom has produced waves of embezzlement, bribery, corruption and other forms of white-collar crime that have forced the government to spread a wide net to track down suspects and their illicit earnings. China also says it faces security threats from cross-border extremist Islamic groups seeking to overthrow Chinese rule over the far-western region of Xinjiang.

Along with electing Meng, Interpol also approved a call for the “systematic collection and recording of biometric information as part of terrorist profiles” shared by the organization.