Chinese tourism boom that propped up luxury brands is faltering 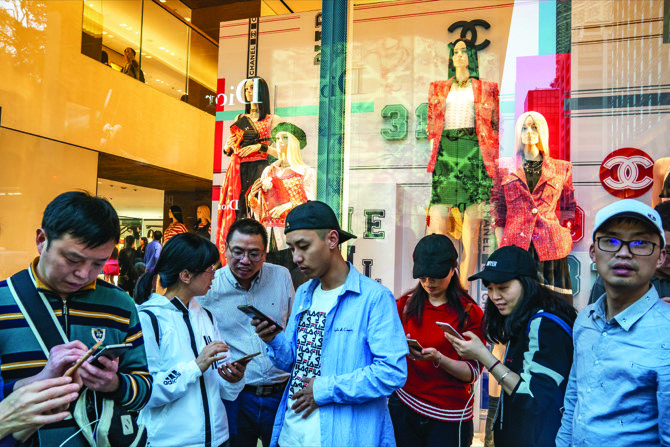 For the better part of a decade, wealthy Chinese tourists have been on a feeding frenzy for luxury brands, casinos and cruise lines. Now there are doubts about how long the buffet will last.

From Tokyo’s glitzy Ginza shopping district to Hong Kong, Macau and New York’s Fifth Avenue, there are noticeable cracks in what has been the very bankable strategy of catering to throngs of newly affluent Chinese traveling the world. Explanations vary from China’s slowing economy to the government’s push to spur spending at home and fluctuations in currency values. Whatever the reason, the result is increasing worry across the globe.

“Luxury brands have gained a lot of traction and growth out of China, but the bloom is off the rose,” said Pam Danziger, president of Unity Marketing Inc. in Lancaster, Pennsylvania, which researches affluent shoppers. “You can’t blame them because that’s where the easy money was.”

Cruise line operators are grappling with this, too. Many poured resources into catering to the Chinese traveler over the past few years only to have demand disappoint. In early 2017, Norwegian Cruise Line Holdings Ltd. unveiled a ship “built for China” that included bigger rooms specifically designed for extended families. But the effort was a flop and the company is now spending $50 million to revamp the ship for Alaskan cruises.

Casinos are feeling the pressure, particularly in Macau, the world’s largest gambling hub, which includes properties from Las Vegas Sands Corp. and MGM Resorts International. Chinese daily visitors from the mainland are still streaming in, spurred by the opening of a bridge linking to mainland China and Hong Kong. But the high rollers who have traditionally propped up casino receipts are staying away from the baccarat tables in the former Portuguese colony.

The Chinese tourists made a perfect target for luxury brands. Thanks to their homeland’s rapid economic growth, they are newly wealthy, full of aspiration and hungry to display their elevated status. Timing also made them invaluable, with their conspicuous consumption taking off just after the financial crisis. As a result, China became the world’s biggest spender in international tourism in 2012, according to data from the World Tourism Organization, a United Nations agency.

In Tokyo, they have been a ubiquitous sight, with shoppers filling up empty suitcases with high-end cosmetics in duty-free airport shops, and tour groups flooding into jewelry stores. Marketing around the Chinese New Year has become the norm, with even the U.S. catching on to the opportunity. SeaWorld San Diego and the Chicago Symphony took part this year. In Las Vegas, the Bellagio put a giant pig in its lobby in honor of the Year of the Pig, and Caesars sent a dragon parade through its Forum Shops mall.

But China’s leaders would like more of those purchases made at home, and they’re taking actions to support that now that the country’s economic growth has slowed. The government reduced taxes on imported goods to encourage its citizens, the world’s highest-spending duty-free shoppers, to buy domestically. It’s also cracking down on daigou – a gray market of surrogate shoppers who buy products like designer handbags overseas for customers in mainland China. It’s a cohort that accounted for an estimated $6 billion in sales in 2016, according to Bain.

Those efforts might be starting to work, given that companies like Capri said its business in China is still growing but struggling in Japan and South Korea because of fewer Chinese tourists. The Chinese have also long been savvy at arbitraging between currency fluctuations and taxes to determine which location is the most attractive to buy the latest handbags, fashion and perfume – a task often handled by daigou.

Shoppers such as Jessica Yang, a 35-year-old lawyer in Beijing, are reconsidering options.

“I buy most of my luxury goods when I travel overseas or at duty-free stores at airport,” Yang said. “If the price is not significantly higher in China, I would also consider buying at a domestic counter.”

Tiffany has been particularly hampered by the slowdown. Last quarter, executives singled out lower spending by tourists, particularly from China, to its flagship store in New York, as a reason for missing analysts’ estimates. Now it’s shifting advertising dollars to other nationalities as a hedge.

“It’s something that we have to deal with,” Tiffany Chief Executive Officer Alessandro Bogliolo said in a November interview. “In the luxury business, tourism is an important part.”

Many North American luxury labels consider themselves underexposed to the Chinese market, especially compared with European peers who are faring better. Most are now making inroads in mainland China, mitigating the effects from shifts in tourism. The big handbag labels Coach, Kate Spade and Kors all see China’s domestic market as key to their future and are opening stores there.

L’Oréal CEO Jean-Paul Agon, anticipating questions from analysts on an earnings call last month, was adamant: “We saw no slowdown in China.” Overall the rate of growth in global luxury is expected to remain unabated, even amid macro- economic uncertainties like the ongoing trade dispute with the U.S., according to Bloomberg Intelligence.

That’s why any sign of volatility in the mighty growth engine is cause for concerns. In Tokyo, a sudden drop in sales at
high-end department stores in January triggered alarm bells, coming after Chinese visitors to Japan more than doubled since 2014. Sales rebounded in February at Takashimaya Co. and J Front Retailing Co., which oversees one of the newest luxury shopping complexes in the heart of Ginza. Still, retailers like Isetan Mitsukoshi and Sogo & Seibu said sales were relatively flat from a year earlier during the week of the Chinese New Year holiday.

“This shows you can’t depend upon Chinese tourism as the drivers of your business,” said Danziger, the luxury analyst. “It’s a dangerous place to be.” Cécile Daurat, Matt Townsend & Kim Bhasin, Bloomberg