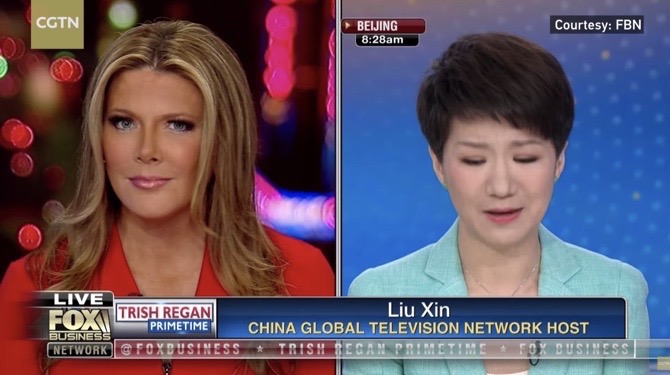 A  Fox Business Network host and a broadcaster for Chinese state television sparred over key trade issues on a live debate broadcast by the U.S. network, after their online fight went viral on Chinese social media.

Liu Xin, a host for state-run channel China Global Television Network who appeared from Beijing, said early on that she didn’t “have any insider information.” She also clarified Fox host Trish Regan’s misconception that she is a member of China’s ruling Communist Party.

Her appearance, which took the form of an interview, came as Chinese state media increases its anti-U.S. rhetoric, running commentaries urging unified resistance to foreign pressure. The two engaged in a conversation about major issues in the ongoing trade war between their two governments.

In response to a question from Regan, Liu said tariffs should be lifted altogether.

“I think that would be a wonderful idea, don’t you think? For American consumers products from China would be even cheaper, and for consumers in China products from America would so much cheaper too.”

Regan asked what if the condition for Huawei Technologies Co. doing business in the U.S. was that it shared its technological secrets. Liu said that would be fine – if Huawei was paid for it. U.S. President Donald Trump blacklisted Huawei in a bid to stymie its access to the U.S. market earlier this month and is weighing similar restrictions on as many as five other Chinese technology firms.

“No one wants a trade war, yet we have to think about the next steps,” Regan said at the close of the segment, while Liu invited the Fox anchor to China for further discussion.

A war of words between the two quickly spread on Chinese social platforms last week after Regan said on her show that America had no choice but to wage a trade war against China.

After a Twitter exchange, Regan issued a debate invitation to Chinese state television and the Communist Party-affiliated Global Times urged the hosts to set a date.

Posts about the fight had 260 million views and generated more than 53,000 comments on popular Chinese micro-blogging site Sina Weibo by the time it aired yesterday [Macau time] in the U.S. Many Chinese social media users were cheering for Liu, who has regularly accused Regan of playing fast and loose with facts about China-U.S. trade tensions.

CGTN said it initially intended to broadcast the exchange in China but couldn’t because Fox held the copyright. Trump is a notoriously avid fan and promoter of Fox News. But there was no indication that he had put Regan up to the debate. Karen Leigh, Bloomberg