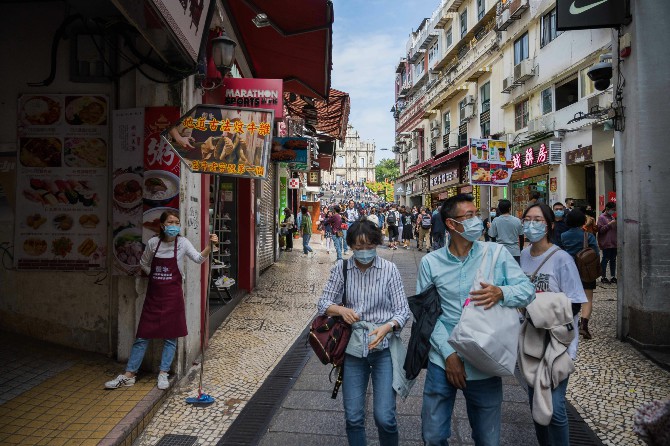 Mainland China has resumed processing both Individual Visit Scheme (IVS) and group tour travel visas to the SARs, according to an official announcement issued by the police department of Chongqing.
Chongqing city is one of the four municipalities under the direct administration of the Central Government of China.
Since the end of January, mainland China partially shut down its immigration system, specifically concerning mainland residents’ outbound traveling services. The government suspended the issuance of travel endorsements to Hong Kong and Macau as part of its measures to deter the spread of Covid-19.
At that time, some mainland residents were in the middle of travel endorsement applications to the SARs. However, due to the sudden suspension of service, many travel documents were kept by the concerned department without being returned to their owners.
On May 29, the Chongqing police authority released an infographic on its official Weibo account announcing the resumption of service.
According to the announcement, starting June 1, members of the public can visit the Chongqing police department to apply for a travel endorsement to go to Hong Kong and Macau.
Regarding “immigration affairs,” the police department is now issuing both IVS and group tour travel visas. The IVS is mostly issued by capital cities, in addition to several other mega cities.
The announcement made by Chongqing did not specify the details of the visa policies at the current stage.
The statement also disclosed the resumption of visa applications to Taiwan.
However, according to the five comments made on a Weibo post by the official account of the Chongqing police department, which has 1.1 million followers, the announcement doesn’t reflect the reality of the situation.
According to one comment on the Weibo post, some people still experienced rejection when applying for the travel endorsement.
Group tour visas are issued by the remaining mainland cities. Previously, group tour visa holders could only travel to Macau or Hong Kong as a member of a travel package. However, since 2019 mainland China has been amending the policies. Now, individual travel visas and group tour visas share the same regulation.
Mainland China issues travel endorsements in three ways: online application, self-service at police departments, and applications through manual service such as submitting documents directly to the office’s service counter.
Mainland immigration departments frequently change policies regarding the three methods, usually without disclosing the reasons or even the policies themselves. Often, publicly announced policies are different from the ones implemented in practice.
Analysts have previously noted that the resumption of issuing IVS visas will occur after the 13th National People’s Congress.
Macau’s Chief Executive Ho Iat Seng previously said that the local government would be requesting for the central government to resume the issuance of visas under the IVS scheme and increase the number of cities covered by the scheme.
Currently, the scheme is implemented in 49 mainland China cities.
Last year, the total number of Chinese IVS visitors in Macau totaled nearly 13.1 million, the largest number of IVS visitors in a year.  Staff reporter