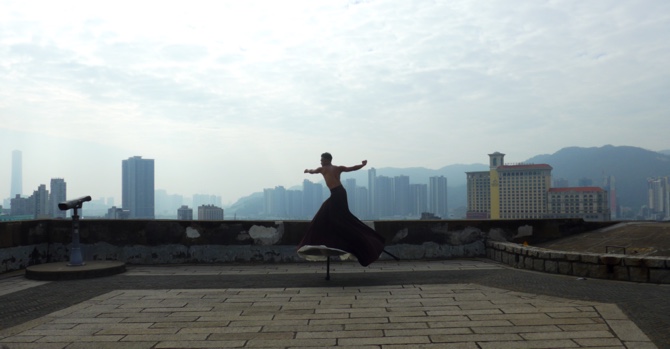 The 19th Macao City Fringe Festival commenced on Friday at Mount Fortress with an opening ceremony and contemporary dance performances.

Local and international performers took to the improvised stage – which was a corner of the viewing deck outside the Macao Museum – to present audiences with entertainment that the curator, Tracy Wong, described as “highlighting the cultural blend in Macau.”

Body Traveler was the name of the opening performance, an outdoor contemporary dance piece shown at Mount Fortress. It falls under the subtheme “On Site” of this year’s festival. Wong’s picks do not necessarily work only outdoors, but those that are held in open air venues seek to “enrich the experience of the festival,” according to Wong.

This is the second year the curator and her group are running the initiative with the Cultural Affairs Bureau (IC), which organizes the Fringe Festival.

Similar to last year, the curator said she travelled to many cities in the past 12 months to sample and audition feasible acts for this year’s festival. Asked what criteria she uses, Wong said she picked shows that were “suitable for Macau.”

When asked to elaborate, Wong said, “Macau has a culture with features from both the East and the West. I thus chose performances that blend or mix up these various elements.”

The curator said that contemporary dance is only starting to become popular in Macau, and that the market needs to be matured in the coming years in order to appreciate more sophisticated pieces. Accordingly, she picked more straightforward, less abstract performances for the festival.

By bringing the art form to the Fringe Festival, Wong said she hopes to familiarize local art viewers with this type of performance.

As the type of art is only at its primary stage in the city, “we think more abstract concepts, [such as] dances with dancers standing still for several minutes, will be for a later stage,” the curator explained.

Her work may already be paying dividends. Wong said that the public’s reception to contemporary dance in this year’s lineup was warming, with “some people happy upon seeing a stronger line-up in the Fringe [Festival] this year.”

The festival will run until January 19 at various locations in Macau. Besides performances, there are 13 outreach activities, as well as an exhibition on Macau’s garment industry.