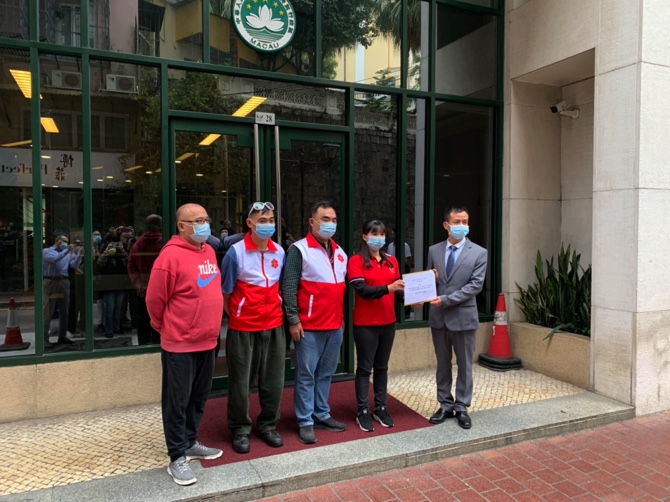 A number of employees of gaming operators were allegedly forced to take unpaid leave due to their yellow health code status.

Yesterday, the president of the New Gaming Staff Rights Association, Cloee Chao submitted a letter to the Chief Executive requesting that the gaming enterprises take the initiative to shoulder their corporate social responsibility.

Speaking to the press, the gaming rights activist said that the association had received complaints on the matter from employees of SJM and Galaxy Entertainment Group.

“Those with red and yellow health code statuses and close contacts, as well as those who are unable to work normally due to quarantine arrangements prescribed by the authorities, should be given ‘half-pay leave,’” Chao suggested.

She explained that the company should be using “half-pay leave” on days when employees are unable to work due to a red or yellow health code or when the employee must quarantine.

“The employee will be given two days off and only one day of labor will be deducted,” she explained.

“The majority of employees in the gaming industry understand that the employer and the employee are each responsible for half of the incident, but employees were being given unpaid leave by company heads for various reasons,” she said.

The health authorities revealed that in Macau, 19,044 individuals had a yellow health code status, not including residents in Zhuhai and Zhongshan who are unable to return to Macau.

According to the New Gaming Staff Rights Association, more than 20,000 Macau residents have been affected by the outbreak in Zhuhai and Zhongshan and are now in quarantine or have red or yellow codes.

Chao also explained that casino staff are not able to afford accommodation in Macau due to financial reasons, and as such have chosen to live in Zhuhai or Zhongshan.

Following the 2/2004 law for the prevention, control and treatment of communicable diseases, in order to achieve the legislative objectives, individuals and public or private entities are obliged by law to work closely with governing entities and to comply with the orders and guidelines issued by them.

Chao recalled that local authorities have provided guidance stating that people with yellow codes are not suitable for front-
line or public reception work. Therefore, the gaming enterprises have explicitly stipulated that only those with green codes can enter hotels and casinos.

In addition, she also requests that the government consider giving out more than MOP8,000 in consumption cards, given that “the latest outbreak in Zhongshan and Zhuhai near the peak season of the Chinese New Year has greatly affected the income of Macau people and SMEs.”

In response to the concern that the bill to amend the gaming law might affect the future survival of “satellite casinos,” Chao said she had received a small number of enquiries from employees who were worried about the closure of their casinos and were adopting a wait-and-see approach.