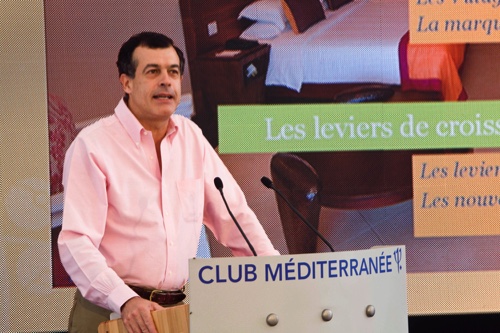 Club Mediterranee SA Chief Executive Officer Henri Giscard d’Estaing said he favors a takeover bid from Fosun International Ltd. over a European offer because the Chinese suitor would better support expansion and help build a luxury image.
Speaking after Fosun raised its latest bid Monday, the CEO said the Chinese are more aligned with the company strategy of marketing Club Med as an upscale destination for travelers. Fosun, which has been a minority owner of Club Med for four years, is a long-term investor that would help Club Med expand the number of sites, particularly in China and Brazil, he said.
“This project is the best for Club Med because there’s a true partnership,” Giscard d’Estaing, the son of former French President Valery Giscard d’Estaing, said in a phone interview.
On Monday Fosun raised its offer hours before a deadline expired for a higher bid than one from competing bidder Global Resorts SAS. The latter will still get a chance by Dec. 17 to come back with a higher offer. The battle for Club Med has been going since May 2013, making it the longest contest for a company traded on the French stock exchange.
For the target company, the tussle has meant the company hasn’t been able to pursue its expansion as planned, the CEO said. Expansion of a site in Sicily, for example, has been compromised by the ownership dispute, he said.
“Having the two offers out there has slowed our development because a certain number of partners, for example, property developers who co-invest with Club Med in creating new sites, have been reluctant to move forward without knowing who’ll own the company.”
Fosun is already a key shareholder in the Yuyuan Tourist Mart in Shanghai, which offers tea culture festivals and other tourism-related services, the executive said. Fosun’s experience in that area could help Club Med further develop its business in China, which he described as the world’s biggest tourism center.
Club Med already has four villages in China, all among its more expensive offerings. The company has been trying to make those more welcoming to the Chinese by adding activities including karaoke and mahjong, a card game. The club is also hiring more Mandarin-speaking staff, he said.
Global Resort’ most recent bid included private-equity investor KKR & Co., led by U.S. billionaires Henry Kravis and George Roberts.
A private-equity investor would be bad news for Club Med, Giscard D’Estang said, as the company’s need to make a “rapid return” on the transaction within a few years would likely lead to sales of existing properties and villages. Andrea Rothman , Bloomberg