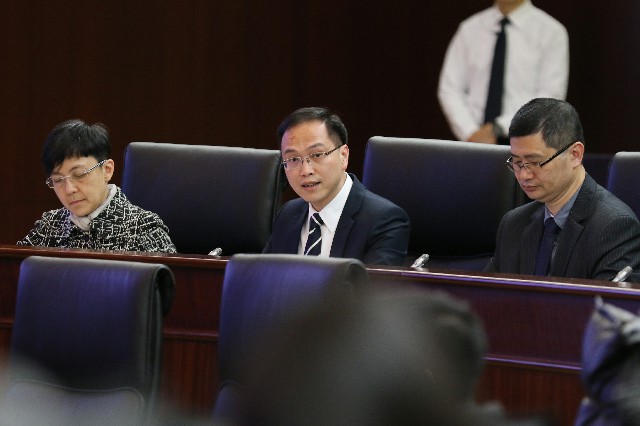 The response from Kou Peng Kuan, director of the Public Administration and Civil Service Bureau (SAFP), to a Commission of Audit (CA) report that highlighted mismanagement in the civil servants recruitment system, has prompted a new reply from the CA. In it, the CA contests the counter-claims of the SAFP and its director.
The CA’s statement, issued on Monday evening, addresses Kou’s reply item per item, and thus continues the exchange of arguments that has erupted between the CA and the SAFP director since the critical report was first released.
In Monday’s statement, the CA accused Kou of disrespecting the audit authority through its public statements, which ran contrary to the acknowledgements made the Office of the Chief Executive.
The Commission of Audit noted that in the previous report, released on September 3, the Commission made “an analysis from a legal point of view, of the public administration and in accordance with the written replies of all the public departments involved,” adding that the report had a broad scope and referenced reports from the past 20 years with the purpose of identifying recruitment problems.
Kou’s public refutation of the CA’s conclusions prompted the head of the Audit Commission to exercise his right to respond, which he claimed was necessary “to avoid negative impacts on future audit work” and also to avoid “misleading the public.”
Addressing Kou’s claims that “services had to assist the SAFP in carrying out its tasks,” the CA noted, “18 of the 39 services interested in recruiting staff corroborated this statement.
On the other hand, shortcomings in the scheme’s design led to large expenditures in terms of human and material resources.”
The CA statement additionally noted that the report reveals a number of shortcomings in several aspects of the Scheme, which started in 2016, notably in its preparation and implementation, as well as in costs and efficiency of the tendering procedure.
More importantly, according to the CA, is that the departments in need of staff and holding recruitment drives saw their interests harmed by the lack of efficiency of the system.
Regarding Kou’s statement, claiming that “citizens’ applications could not be refused in the recruitment tenders” and that “there were expenses that could not be avoided,” the CA notes that the report revealed, “due to the fact that since the recruitment scheme was defective, most applicants submitted more than one application for job vacancies, which led to a drastic increase in the number of applications for the second phase causing the resources invested by the services to double.”
The CA added, “as the electronic application platform allowed applicants to simply submit their application to all stages of professional or functional competency assessment, it resulted not only in duplicate work in verifying applicants’ documents as well as wasting resources and time.”
According to the CA, this led the audit to state that “the SAFP should design the recruitment scheme carefully to avoid wasting resources”. On this, the CA remarked that their opinions are only focused on “the source of the problems and were intended for the service concerned to improve the recruitment scheme.”
Furthermore, the CA denied ever mentioning the refusal of candidates for the examination, nor the expenses related to the leasing of the venues for the examination, neither did it suggest that a cost reduction should be obtained by lowering the remuneration of the staff involved in the tender procedure.
According to the CA, the remarks it made are solely on the “[unnecessary] repetition of applications that caused not just an increase in costs but also extended significantly the tender procedure duration.”
The CA notes that as the manager of all procedures for the selection and recruitment of civil servants, the SAFP must be “aware of the advantages and disadvantages that the implementation of the recruitment scheme would bring, the number of workers in each service, their human resources needs, the labor market conditions of Macau and the specific situation of each career tendered.”
When considered together, these factors should have seen the SAFP better forecast the workload and staff needs for handling the recruitment procedures.
However, the CA noted, “the audit results revealed that services interested in staff recruitment had to undertake work that had not been foreseen.”
The final section of the CA statement conceded that the recruitment of civil servants is a complex and a very important matter “given that staff recruitment involves all public services and tens of thousands of applicants.” Nevertheless, it said, “it is not acceptable that there have been so many failures.”
The Commission also took the opportunity to remind director Kou that before being made public, the audit report had already been reviewed by the Office of the Chief Executive, which also issued a statement through the government’s spokesperson acknowledging the flaws noted in the report, and urging the officials responsible to correct them.
Therefore, in publicly challenging the audit’s views, the CA accused Kou of “contradicting what was written in the [official] reply to the report, [before this was made public] showing lack of respect for the views expressed by it as well as by all the public services concerned.”