Chinese President Xi Jinping is scheduled to attend a gathering in town on Dec. 19-20 for the 15th anniversary of Macau’s return to China, authorities said yesterday. Xinhua confirmed that Xi, also general secretary of the Communist Party of China Central Committee and chairman of the Central Military Commission, will also attend the inauguration ceremony of the MSAR’s fourth-term government. 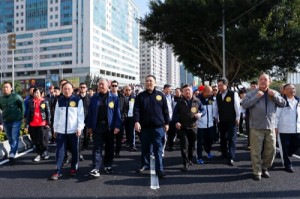 The 31st annual “Walk For A Million” charity event took place yesterday morning. According to the organizers, over 40,000 participants joined, raising a total of MOP16 million. The 3-kilometer charity walk stretched from the Kwan Yin Statue to A-Ma Temple. This year, the organizer invited several Chinese Olympic gold medalists to join the event, waving to the citizens in an open-top bus along the walk. Mr Vong Kok Seng, director-general of the event organizer, Macao Daily News Readers Charity Fund, said that the event was intended to encourage citizens’ enthusiasm for sports and exercise.

Higher taxi fares came into force yesterday with the flag fall rate rising from MOP15 to MOP17. Meanwhile, additional charges for every subsequent 260 meters after the first 1,600 meters increased from MOP1.5 to MOP2, as has the charge for every minute of flag-fall waiting time. The last fare rise for taxi services was back in July 2012. A taxi driver told the Times that many drivers didn’t welcome the increase as it will be the taxi owners who benefit from the rise, rather than drivers who rent the taxis.