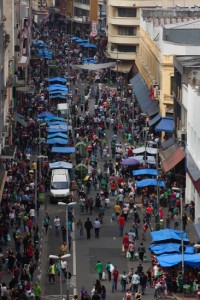 People walk at a shopping district in Sao Paulo, Brazil

Pan-Pearl River Delta authorities (PPRD) will travel to Brazil to boost links between Portuguese-speaking countries and the regional group, the Secretary for Economy and Finance, Lionel Leong, said on Friday.
The secretary disclosed the details of the trip as he led the official delegation for the 2015 Pan-Pearl River Delta Regional Cooperation Chief Executive Joint Conference in Fujian.
He said that the visit to Brazil is expected to help authorities gain a better grasp of green economy issues and technologies. Part of the visit will involve a summary of measures taken to protect the Amazon basin and a demonstration of how Brazil’s regional states were able to coordinate such preservation efforts.
Furthermore, the government’s intention to turn Macau into a service platform between mainland China and Portuguese-speaking countries was reiterated by the secretary, who announced that the SAR is planning to set up representative trade offices in Beijing, as well as in Portugal and Brazil.
The PPRD is an association that covers nine Chinese provinces and two regions – less formally known as the “9+2”. It consists of: Guangdong, Guangxi, Hainan, Yunnan, Guizhou, Sichuan, Hunan, Jiangxi and Fujian, plus the Hong Kong and Macau SARs.
Cooperation at this level is intended to provide a platform for strong regional ties and economic collaboration in the “9+2”, which encompasses some 400 million people living in an area of approximately 1.92 square kilometers.
Leong noted that existing bilateral cooperation between Macau and other PPRD authorities had brought great success over the last ten years. Now the SAR looks to expand its collaboration with Guangxi Zhuang Autonomous Region in the meetings, incentives, conferences and exhibitions (MICE) industry.
The secretary added that he regarded three major tasks as essential to advancing intra-PPRD cooperation next year. Leong emphasized: strengthening tourism cooperation in the region; promoting Macau’s bridging role between the mainland and Portuguese-speaking countries; and synergizing the authorities in their contribution to the “Belt and Road” initiative.