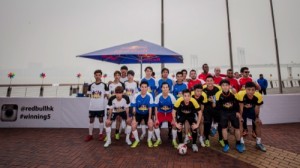 The Red Bull Winning 5 Macau Qualifier was successfully held on Saturday at Macau Tower Outdoor Plaza. After a full day of intense competition, ‘Blue Sky’, ‘Beach Boys’, ‘Vita Green’ and ’Tin Yuk Friends’ qualified for the Red Bull Winning 5 Hong Kong and Macau Final. They will fight against the top 4 of 32 participating Hong Kong teams for the championship title next Sunday February 15th in Hong Kong.
Red Bull Winning 5, a 5-on-5 football tournament with only five members on each team and no goalkeeper, has come to Macau/Hong Kong for the first time. Teams lose a member every time they concede a goal, until there are no players left on one team, or till the end of 10 minutes.  The team with the highest score by the end of the game wins.
This is the first time Red Bull has held a sporting event in Macau. It attracted a large number of applications and only 18 teams were accepted based on a first come first serve basis. Local professional footballers from Macau’s Division 1 league, such as Alison Agnes, Pedro Clementes and Samuel Ramoseau participated, and two of them will proceed to the finals with their respective Macau Winning 5 teams.
‘Blue Sky’, ‘Beach Boys’, ‘Vita Green’ and ’Tin Yuk Friends’ all entered the Red Bull Winning 5 Hong Kong and Macau Finals. Fabio Ritchie, the Beach Boys team captain said, ‘The rules of the game [are] very unique and different from [an] ordinary football game.  After scoring or conceding a goal, the energy level on and off the field changes drastically – the crowd was so into the game and for us players, it was such a thrill!’