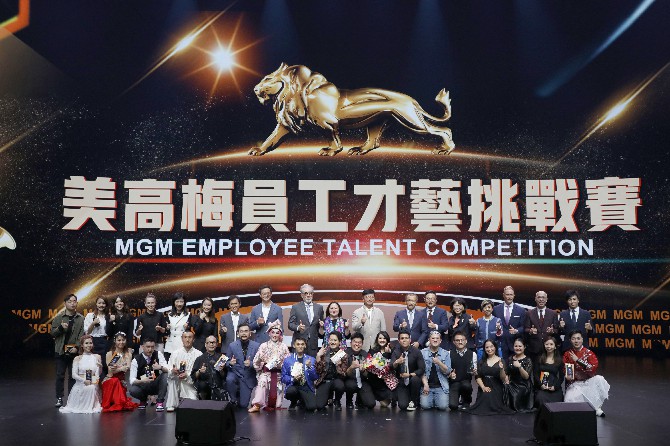 MGM hosted its first “Employee Talent Competition”, attracting over 300 team members to cheer for the 15 finalists on the grand stage of MGM Theater.
Aiming to build a platform for team members to showcase their talents, MGM rolled out this competition online to promote work-life balance and “enliven team spirit in a fun and causal way,” the gaming operator said in a statement.
MGM has set up the “Family and Friends Talents” category to encourage team members to perform with their family and friends.
The competition started off with collecting video clips of team member’s talent performances, where a total of 110 entries by 86 team members of different departments and places of origin were received in the first round.
The finalists bought to the audiences an array of dancing, singing, instrument performance and many other performances. After receiving rounds of applause, the band trio of Angelo, Katrina and Jhay from Food and Beverage Department concluded the show by scoring the Top Talent Award with their singing performance.
Sabrina Chang from Cage Department received two awards, the Outstanding Award in Musical Instruments Category with piano solo, and Team Award in Friends and Family Category with dance performance performed with her dance group. She said, “I thank MGM for hosting this fun competition, so that we could showcase our talent outside of work and get tons of kind recognitions.”