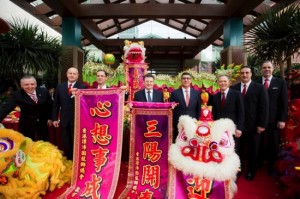 Sands China Ltd. rang in the Year of the Goat Friday with traditional ceremonies and rituals held across its properties. The second day of the Chinese New Year saw Sands China executives gather to participate in what has become an annual tradition for the company.
Sands Macao, The Venetian Macao and Sands Cotai Central each greeted the Year of the Goat with a worship ritual, followed by an eye-dotting ceremony and a traditional lion dance performance. Sands China executives attending the ceremonies also visited the team member dining areas at the three properties, distributing lucky goat plush toys and red packets to team members and hosting rounds of lucky draws. Adding to the festive atmosphere was a lantern riddle challenge, a roasted pig cutting ceremony and a group photo; with MOP 130,000 worth of lucky prizes given away.
“Our team members are the most essential assets of our company, and we value their culture and heritage greatly,” said Edward Tracy, President and Chief Executive Officer of Sands China Ltd. “Chinese New Year is the most important festival in the Chinese calendar and we’re happy to celebrate this special occasion with them. This is a tradition we hope to carry on for many years to come.” 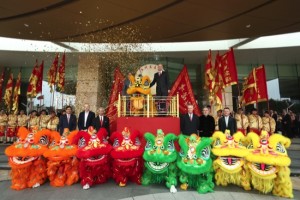 MGM Macau held a lion dance blessing ceremony at the hotel property today to mark the arrival of the Chinese New Year.  The ceremony kicked off with an eye-dotting ritual performed by Mr. Grant Bowie, Chief Executive Officer and Executive Director of MGM China Holdings Limited with his management team, as he wishes Macau a promising year ahead and all an auspicious Year of the Goat.
The ceremony culminated with a lion dance parade to the accompaniment of cymbals, drums, firecrackers and gongs. The crowd watched as the lions marched into the hotel lobby to kick the festive atmosphere up a notch. 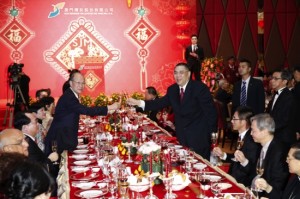 Sociedade de Jogos de Macau, S.A. hosted its traditional Lunar New Year’s Eve Gala Dinner at the Grand Lisboa on 18 February 2015 in the presence of the Chief Executive of Macau SAR Mr. Chui Sai On, Mr. Wang Xindong, Vice-Secretary General, Liaison Office of the Central People’s Government in the Macau SAR, Mr. Pan Yundong, Deputy Commissioner of the Ministry of Foreign Affairs of the People’s Republic of China in Macau SAR, Dr. Vitor Sereno, Consul-General of Portugal in Macau & Hong Kong. Guests were welcomed by Dr. Ambrose So, Chairman of the Board of Directors of SJM, Ms. Angela Leong, Managing Director of SJM, and Mr. Louis Ng, SJM’s Director and Chief Operating Officer.
The evening also saw a video of Dr. Stanley Ho, whose remarks on the Ram won great applause from the guests.
After the dinner, a dragon dance ceremony, officiated by the Chief Executive Mr. Chui Sai On and SJM directors, was held at the Grand Lisboa Piazza to welcome the Year of Ram together with local residents and visitors.