Court convicts lawyer, dozens of others of treason 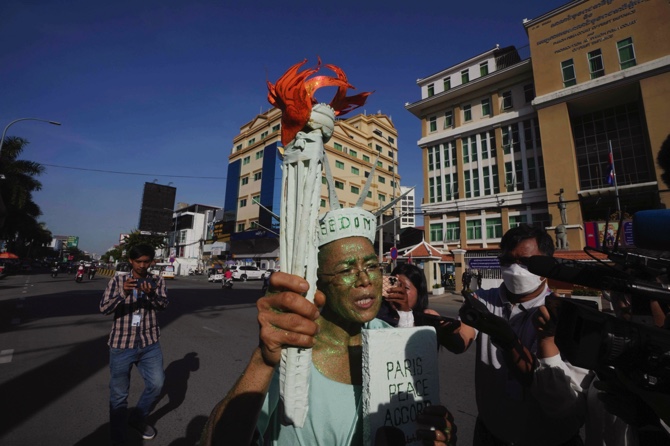 Cambodian-American lawyer Theary Seng (foreground) dressed in the Lady Liberty, talks to the media outside the Phnom Penh Municipal Court

A Cambodian American lawyer and dozens of members of a now-dissolved opposition party were convicted of treason yesterday in a trial that was the latest move to tame all opposition to the long-running rule of Prime Minister Hun Sen.

Lawyer Theary Seng and most of the other defendants had been charged over a failed attempt by the leader of the defunct Cambodia National Rescue Party to return from exile in 2019. Cambodian authorities blocked Sam Rainsy’s return and alleged the 60 defendants were involved in organizing his trip, which Theary Seng and the others have denied.

Cambodian courts are widely believed to be under the influence of Hun Sen, whose authoritarian style of rule has kept him in power for 37 years. The Cambodia National Rescue Party was his party’s biggest rival before it was disbanded by a court ruling just ahead of national elections in 2018 that resulted in a clean sweep by Hun Sen’s Cambodia People’s Party.

“The mass trials against political opposition members are really about preventing any electoral challenge to Prime Minister Hun Sen’s rule, but they have also come to symbolize the death of Cambodia’s democracy,” Phil Robertson, deputy Asia director of New York-based Human Rights Watch, said in an emailed statement. “By creating a political dynamic that relies on intimidation and persecution of government critics, Hun Sen demonstrates his total disregard for democratic rights.”

The Phnom Penh Municipal Court found Theary Seng and most of the others guilty of conspiracy to commit treason, defense lawyer Choung Chou Ngy said. Theary Seng was sentenced to six years in jail, and the others received sentences of five to eight years.

Many of the 60 defendants earlier fled into exile or went into hiding, and it wasn’t immediately clear how many appeared in court for the verdict yesterday. According to Human Rights Watch, 27 of the defendants who are in exile were tried in absentia.

Theary Seng stood outside the court as the verdict was announced, saying she wanted her arrest to be public and “not in the shadow.” Media saw at least three police officers approach Theary Seng, hold her hand and body, and push her into a waiting police truck shortly after the verdict came.

She was garbed as Lady Liberty, in a light green gown and a crown with “Freedom” written on it, and from time to time, she raised up her imitation torch and shouted “free the political prisoners.” She has worn thematic costumes to her court sessions to publicize her belief that Cambodia is not a democratic nation and the trial is unfair.

She told reporters she was ready for a “sham” guilty verdict.

Choung Chou Ngy, who represents Theary Seng but not the other defendants, said he plans to file an appeal. He said the defendants who got five-year terms had their sentences suspended, but those with sentences of six to eight years were ordered jailed, and the judge ordered police to find those who were sentenced in absentia so they could face justice.

U.S. Ambassador to Cambodia W. Patrick Murphy said on Twitter that the sentencing of Theary Seng and the others was deeply troubling.

“Freedom of expression and association, and tolerance of dissenting views, are vital components of democracy,” he wrote. “We call on Cambodian authorities to release her and other human rights activists from unjust imprisonment.”

The disbanding of the Cambodia National Rescue Party, its removal from the ballot, and a government crackdown on media and independence voices paved the way for Hun Sen’s party to sweep the 2018 elections and claim every seat in the National Assembly. He has repeatedly stated his intention to stay in office until 2028 and has endorsed one of his sons to succeed him.

Sam Rainsy, Hun Sen’s main political nemesis, has been in exile since 2016 to avoid serving prison sentences on defamation and other charges he says are politically motivated.

The trial of Theary Seng and her co-defendants began in 2020 but was suspended until December 2021 due to coronavirus restrictions. Initially, nearly 130 defendants were named and the proceeding was split into three trials for manageability.

In a related case in March, the court convicted 21 people of treason and related charges for their nonviolent political opposition to Cambodia’s government. Seven exiled leaders of the Cambodia National Rescue Party, including Sam Rainsy, received 10-year prison terms in absentia. Another 13 defendants were ordinary party supporters whom the court ordered to serve more than three years. SOPHENG CHEANG, PHNOM PENH, MDT/AP