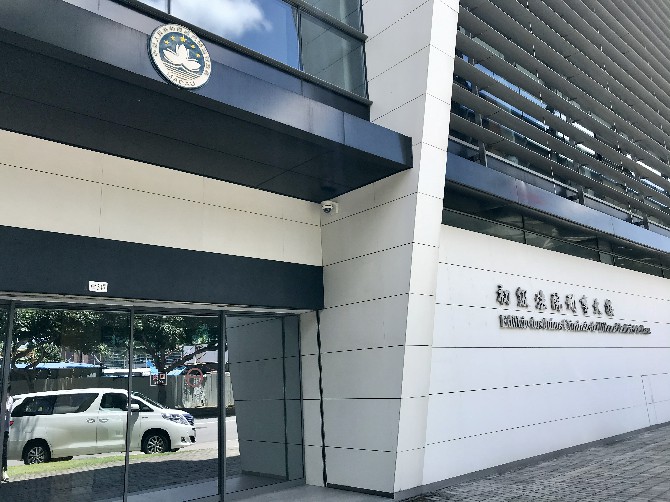 Hunan (Macao) Engineering Equipment Installation Company Limited became the focus of yesterday’s court session in the high-profile case against the former leaders of the Macao Trade and Investment Promotion Institute (IPIM) and their alleged affiliates.
The Public Prosecutions Office (MP) suspects Hunan Engineering was only a shell company because it had no staff at the time it submitted residency applications for two employees and near-zero income. Yet its owners had attempted to hire two managers to oversee human resources and accounting.
It was also revealed yesterday that the company is co-owned by the most recent Macau representative to China’s National People’s Congress, Kevin Ho, in addition to two other partners currently standing trial.
This information was revealed yesterday morning when the Court of First Instance gathered to hear a witness, an investigator from the Commission Against Corruption (CCAC) who was in charge of the investigation into the allegedly false applications, explain the details of the two positions Hunan Engineering was said to be hiring for.
In the session, the CCAC investigator explained the conclusions reached by the corruption watchdog about the applicants and the procedures.
The CCAC determined that the majority of the issues were undertaken by one of the partners of Hunan Engineering, Ng Kuok Sao. Ng performed these actions with the assistance of Miguel Ian Iat Chun, a former chief of the IPIM’s Residency Application and Legal Affairs Division and most recently a member of staff at the Pension Fund.
According to the investigator, Ian and Ng were in close communication over the case of the two applicants, with Ng often requesting help from Ian on the status of the requests, as well as providing insight on which documents they should provide to try and overcome IPIM’s refusal to grant them residency.
In court, the investigator showed several documents and records to prove that Ian helped to provide recommendation letters and a declaration from Hunan Engineering that was then submitted to IPIM in the name of the applicants.
Questioned by both the prosecution and the judges on what benefits had been granted to Ian in exchange for the job, the investigator said they believed Ng had offered him the possibility of acquiring apartment units at a development in Hengqin at a price about RMB4,000 lower per square meter than the market rate at that time.
Nevertheless, the investigator admitted that they failed to prove that Ian had acquired any of those housing units, having only evidence that he had shared with Ng the interest in acquiring them.
The CCAC investigation also revealed that several people, including the applicants and others working on their behalf, submitted to IPIM a declaration of work experience and jobs that the CCAC now considers to be forgeries. The proof for this was that, at the time of these declarations, the applicants, including a woman named Iu Mei Lei, had already stayed in Macau for long periods, as shown by their immigration records.
The CCAC said it concluded that Hunan Engineering was acting as a shell company and that the documents submitted to IPIM were forged or contained false information.
It found that the records of the company in several governmental departments – including the Social Security Fund, the Financial Services Bureau and the Economic Bureau – showed clearly that the company did not have any employees. In fact, most of its former employees were recorded as having left the company around three years earlier.
Moreover, the company bank records demonstrated low to no entries or tax filings submitted to the government, showing that the company had generated no income for several years in a row. These records proved the company’s inactivity and, consequently, the lack of necessity in recruiting the two applicants for the positions of General Manager for Accounting and General Manager for Human Resources, positions used in the IPIM applications.
To prove that the applicants were aware of the illegality of the scheme and also the participation of the company in the whole process, the CCAC investigator showed records of bank transfers made by or in the name of the applicants to another company owned by Ng, the One Kin Construction Company, Ltd. The total value of the transfers was RMB600,000, which was refunded around three years later to the applicants after IPIM’s successive refusal to grant the residence authorization to the applicants.
Questioned by the judge, the investigator mentioned that the amount paid by the applicants was too high and unjustified, showing that other companies in the market which provide services of consultancy and delivery of documents to IPIM for the same purpose, charge as little as MOP5,000 or did so free of charge.
Although the applicants were not granted the residency in Macau, the investigator noted that the simple submission of documents to IPIM and the lengthy process would open the possibility for the applicants to apply for and renew their authorizations to stay in Macau for nine months in the case of one of the applicants and one year in the case of the other.
The trial will continue today hearing more accounts from witnesses in the case. In total, prosecutors have accused 26 people of several crimes of corruption, including document forgery. Among the defendants are several former high ranked IPIM officials, including its former president, Jackson Chang.

Kevin Ho, a partner and administrator of Hunan (Macao) Engineering Equipment Installation Company Limited, has denied any involvement in the activities of the firm. Two out of the three business owners, excluding Ho, are being accused of corruption and other unlawful activities in their treatment of residency applications reviewed by IPIM. “I was never involved in the business activities of this company. I think at the beginning I was asked by Ng [Kuok Sao] to help to launch the company,” Ho told TDM Radio, adding, “Ng and also Tang [Zhang Lu] lost contact with me a long time ago so there was no way to close the company.” Both Ng and Tang are defendants on the IPIM residency scheme case and are being tried in absentia as they are both at large. Ng has been already given a five-year imprisonment sentence for fraud in an unrelated case.