Courts | One found guilty in attack on lawyer Jorge Menezes 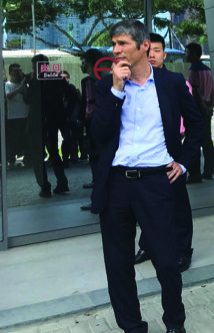 One of the two assailants who attacked lawyer Jorge Menezes has been sentenced to one year and nine months of imprisonment, the Court of First Instance announced on Friday morning. Meanwhile, the other has been acquitted, considering that his identification is “questionable”.

Walking his 5-year-old son to pre-school on the morning of May 16, 2013, lawyer Jorge Menezes was suddenly ambushed in Sintra Square by two mainland assailants who swung at him with bricks strapped to their hands. The attack reportedly had all the hallmarks of organized crime with, according to some, an obvious triad connection.

The Public Prosecutions Office (MP) and the Court of First Instance disagreed. In Friday’s sentencing, just one of the two defendants – both Chinese nationals from the mainland – was sentenced and to less than two years in prison.

According to the judge, “all accusations related to the second defendant were proven.”

“The second defendant is convicted of an aggravated offence against physical integrity, and is sentenced to one year and nine months in jail without probation,” the judge announced. Further, the second defendant, who is a mainland man, is obliged to pay MOP2,000 for the lawsuit. The court issued an immediate detention order against this specific defendant.

Regarding the first defendant, who has never been present at any court trials, “the court considers that the identification of the suspect is questionable.” The court ruled that the first defendant is not guilty, and that the imposition of criminal compulsory measures on him was revoked immediately.

The Court of First Instance will bear the first defendant’s lawsuit fee, according to the judgement.

Bricks and other weapons that were used by the defendants to attack Menezes were seized and ordered to be destroyed by the judgement.

After the verdict, lawyer Menezes expressed his doubt regarding the acquittal of the other defendant given all the evidence.

“He was in the surveillance videos. He appears to be running away with a brick in his hand. You can see that he was trying to attack me and you can see me taking the brick from his hand,” said Menezes, adding that the acquitted defendant’s face can be identified when zoomed in on the surveillance footage.

Menezes also said he did not approve of the Court’s sentence against the convicted defendant, calling it too lenient since the attack could have resulted in his death or permanent injuries to him.

He also criticized the MOP5,000 amount that had been set as bail for one of the defendants.

“No one would return to Macau for the trial [for that amount],” said Menezes, who considered it foreseeable, even at the time, that the defendants would flee from the city.

Describing the trials as a waste of time because the prosecutors failed to investigate the mastermind behind the attack, Menezes said he is considering an appeal. Mostly, he wants the MP to reinvestigate the case.

“I was only lucky that the two were incompetent at their job, otherwise I would not be here. If this is the end, it is an unhappy ending,” said Menezes. “It is all very strange.”