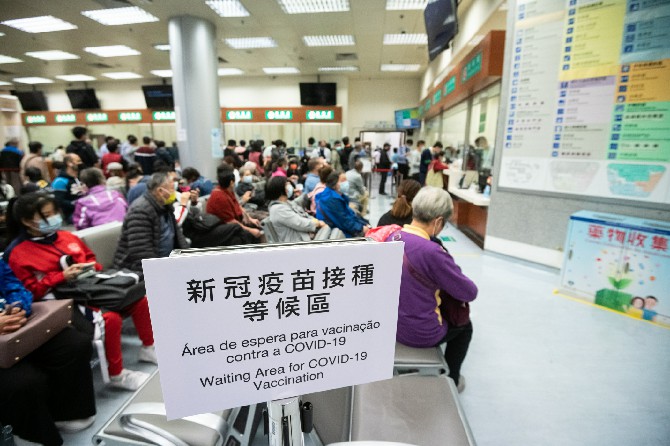 Some 1,200 local residents were inoculated with their first dose of a vaccine for Covid-19 as of yesterday afternoon, while another 2,600 locals registered to schedule their vaccination, Dr. Alvis Lo, medical director of the Conde de São Januário Hospital, confirmed in a media briefing yesterday by the Novel Coronavirus Response and Coordination Center.
Lo stated that the vaccination rollout, which began for the general public yesterday, played out smoothly at the city’s 12 vaccination stations.
“We only observed cases displaying some common, and mild symptoms after vaccination, such as tiredness and pain at the injection site. No individuals developed severe after-effects yesterday after receiving their shots,” Lo stated.
When asked by the media about the possibility of setting up more vaccination sites, considering some complaints lodged by locals who experienced relatively long waiting times at vaccination sites, Lo said that the existing 12 stations can handle at least 5,000 inoculations daily.
“The current capacity [the 12 stations offer] can handle the daily demand with ease. But we will adjust the supply based on the demand. If there is a higher [daily] demand for vaccination, we will study opportunities to establish more inoculation sites,” Lo elucidated.
He also stressed that a 30-minute wait after the vaccination is considered necessary to detect any unwanted medical side-effects.
The vaccine that 1,200 locals were injected with yesterday was the inactivated vaccine, developed by China’s state-owned pharmaceutical company Sinopharm Group. The official anti-coronavirus website statd that it has a prevention efficacy of 80%.
The first batch of 100,000 doses of inactivated vaccines landed in Macau on February 6.
The SAR government earlier announced that around 100,000 doses of another type of vaccine, the mRNA-based vaccine developed by German drug manufacturer BioNTech and proxied by Fosun Pharma — with over 90% efficacy — will arrive in Macau in late February.
“The vaccination for the second vaccine [the mRNA-based vaccine] will be slated to commence in March, as scheduled. The details regarding its rollout will be announced in due course,” Lo said in response to the media’s query over the inoculation timeframe for this type of vaccine.
He stressed that the more people in a community to get vaccinated, the faster and more efficiently the community can reach herd immunity. He added that it is difficult to determine an optimal vaccination rate for the community since there is insufficient data.
When asked whether vaccination could replace Covid-19 testing for traveling into mainland cities, Lo said that it is not yet on the table and no guidelines regarding the matter have been formulated so far.
However, he offered reassurance that the SAR government would explore the possibility and feasibility of swapping a Covid-19 test result with proof of vaccination, and research into similar policies implemented by other countries and regions will be conducted.
As of yesterday, Macau has registered a total of 48 confirmed Covid-19 cases. The 47th case is still hospitalized, following the 43-year-old female’s positive test on February 19.
The 48th confirmed case, a 30-year-old male, was discharged from the hospital on February 20 after testing negative two times on February 17 and 19. He is now observing a 14-day quarantine following his recovery at the Public Health Clinical Center at Alto de Coloane.
The details of the 27th round of mask supply for locals and non-Macau residents were also spelled out in the press conference. A total of 30 masks, with a value of MOP24, will be available for purchase by eligible individuals from February 26 to March 27.
On February 9, Chief Executive Ho Iat Seng and other key authorities received their first dose of the inactivated vaccine. The debut vaccinations for prioritized groups also started on February 9, while the first vaccinations for all Macau ID holders commenced yesterday.