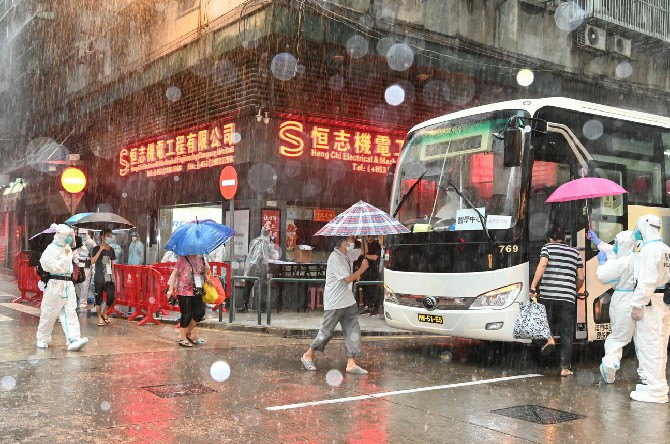 Authorities have disclosed the itineraries of the city’s two latest Covid-19 patients, including routes taken to local supermarkets and a restaurant.
The Novel Coronavirus Response and Coordination Centre confirmed on Saturday that two more Covid-19 cases were registered, bringing Macau’s tally to 77.
Patient 76, a 53-year-old man, is a mainland non-resident worker who lived in the same building as case 75. Nucleic acid tests (NATs) carried out on September 27, October 5, 6, and 7 were all negative. However, the test done on October 8 returned a positive result.
The patient had been under medical isolation since October 4, as he was deemed a close contact of case 75.
Patient 76 had been vaccinated with one dose of Sinopharm’s inactivated vaccine on May 31 in Macau, and had a fever on October 8.
On October 4, the patient boarded bus no. 17 (MX-15-52) bound to Cultural Center at Jardim S. Francisco bus stop. He met up with a friend outside Praça Kin Heng Long and boarded the same bus route at Alameda Dr. Carlos D’Assumpçao stop before getting off at Amaral.
He had dinner at Jardim Triangular at 7:16 p.m. and left home by 8:12 p.m.
Meanwhile, patient 77 is a 49-year-old Vietnamese woman, also a non-resident worker. She is friends with patient 75. NATs done on September 25, October 4, 5, 6, and 7 all yielded negative results. However, the NAT done on October 8 came back positive.
The woman had been under medical observation since October 5 as she was a close contact of patient 75.
Patient 77 had been vaccinated with two doses of Sinopharm inactivated on July 1 and July 30, and showed no symptoms.
She stayed at The Bayview (Tower 3) in the morning of October 4. She went to
Sunsco Supermarket nearby at 4:22 p.m and to Cheang Chong Kei Frozen Food Ltd at 4:48 p.m. before returning home.
Both patients have been brought to the Public Health Clinical Center for further diagnosis and treatment.

771 RESIDENTS TESTED
The center has reported that all NAT testing at The Bayview, where patient 77 had stayed, was completed October 9.
A total of 771 residents were tested, along with 102 environmental samples collected from common areas of the building. All results came back negative, and building control measures were lifted that same day. The building was not set as a red zone due to it being considered a low-risk infection site.
From 8 a.m. yesterday, residents of Edifício San Mei On inhabitants were transferred to a hotel to continue their medical observation, as case 76 resides in this building.
According to the standards of the National Health Commission, of the 12 cases related to case 64, four of them are considered asymptomatic infections and eight are related to imported cases. Staff Reporter