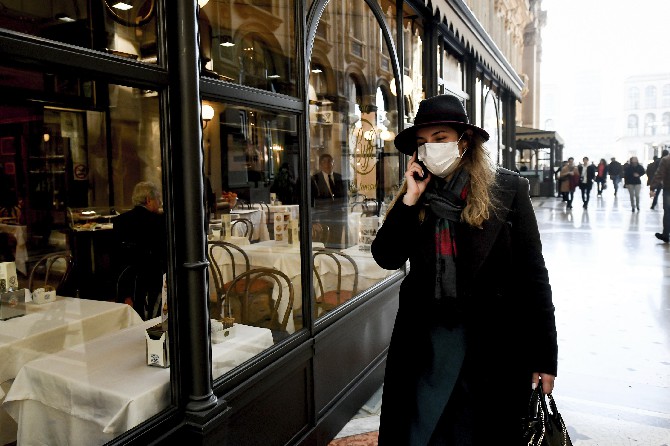 Police manned checkpoints around quarantined towns in Italy’s north yesterday and residents stocked up on food as the country became the focal point of the outbreak in Europe and fears of its cross-border spread.
Italians traveling abroad were already feeling the effects of a crackdown, with a bus from Milan barricaded by police in the French city of Lyon for health checks and Alitalia passengers arriving in Mauritius threatened with quarantine.
Civil protection officials said 219 people had tested positive for the virus in Italy and five people had died, including two elderly men in northern Lombardy. It is the highest number of cases outside Asia, and underscores the limits of Italy’s prevention protocols, which are the most stringent in Europe.
While Italian authorities canceled soccer matches, Masses and closed schools, theaters and even Venice’s famed Carnival, they also sought to calm fears by noting the virus’ low mortality rate and the far higher number of Italians who have died from the seasonal flu this year. The five people who died with coronavirus were all elderly and two of them had other serious ailments.
Speaking on state-run RAI news, virologist Ilaria Capua of the University of Florida noted that Italy’s high number of cases were due to the fact that Italy was “actively seeking them out.” More than 3,000 people have been tested for the virus, most of whom had direct contact with those infected.
Residents wearing face masks and gloves lined up at Codogno’s supermarket to stock up on food, only to find out the market was still closed on orders of the mayor. Later, groups of four at a time were allowed into the bakery in nearby Casalpusterlengo, and one at a time into the pharmacy.
The fears spread to Lombardy’s capital, Milan, Italy’s financial hub, where the final two runway shows of Milan Fashion Week scheduled were canceled. While most fashion houses held shows as usual Sunday, Giorgio Armani and Laura Biagiotti presented their collections behind closed doors, streaming live for the fashion public.

Patient zero
The first case in Italy, or patient 1, is a man, 38, who is believed to have got the virus after dining with a friend, or patient 0, who had come back from China, Italian news agency ANSA reported earlier.
The other two initially infected people are the 38-year-old’s wife, a pregnant teacher on maternity leave, and a third person who went to hospital suffering symptoms of pneumonia after doing sport with the 38-year-old.
The teacher had not been in contact with children.
The other three are clients of a bar Codogno, near Lodi, owned by the father of the man who did sport with the 38-year-old, sources said. The three customers never came into direct contact with the 38-year-old, according to the sources.
Meanwhile, his friend, or patient 0, went to the emergency room of the hospital on Thursday.
He is thought to have come back to Italy on a China Airlines flight on January 21 and to have met the 38-year-old while he had flu symptoms, between February 1 and 8. He has, somewhat surprisingly, tested negative for the virus, ANSA said
Virologist Giorgio Palù, cited by the Italian agency, said that this was possible, for example if there was no clinically significant amount of virus left in his airways at the time of the test.
The wife with the coronavirus is also at the Sacco, where the entry of relatives into the ward has been strictly forbidden.
The first man’s family members have been placed in isolation, sources said. MDT/AP