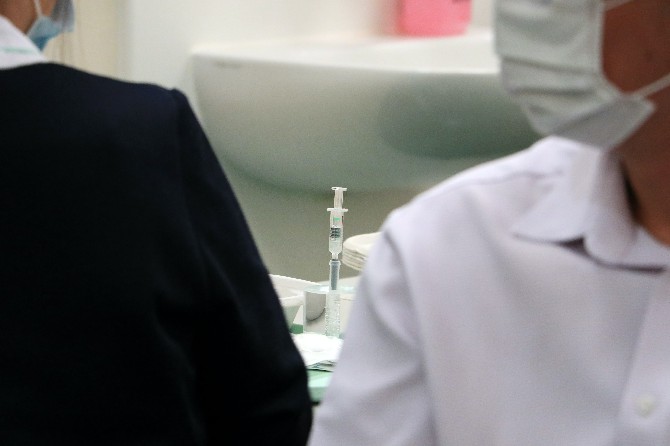 The government will no longer allow local residents to alter any information relating to their vaccination record, in order to preclude any recurrence of the incident in which a person mistakenly received two different types of vaccines, Dr. Tai Wa Hou, coordinator of the Health Bureau’s Covid-19 Vaccination Operation, confirmed yesterday at the regular Covid-19 media briefing.
Tai’s remarks came after the Health Bureau (SSM) received a report on April 9 stating that an individual took the first dose of the Sinopharm vaccine on March 11, and then changed their online vaccination record to state that they had been given the mRNA vaccine. As a result, they were given a second dose of a different vaccine; an mRNA vaccine, on April 9.
“Following the [above] incident, we modified the online registration system immediately afterward. It no longer allows users to alter any information of their first dose of vaccine taken,” Tai stressed.
Although the mistake was made by the user, Tai acknowledged that the medical staff also bear some accountability for failing to confirm the individual’s vaccination data through their internal system before giving the shots.
“There was indeed a negligence of medical staff [involved in the accident] when it comes to the verification process,” Tai stressed, offering an apology to the public.
He confirmed that the individual concerned is not required to take another dose of the Sinopharm vaccine — there is currently no medical study on whether taking two different types of vaccines for the whole course of treatment might increase the risk of side effects, or compromise the vaccines’ efficiency against Covid-19.
“There are even some medical studies saying that taking a cocktail of vaccines may help increase the efficiency [against the disease]. I know the University of Hong Kong is now conducting a study related to this,” he added.
The original intention of allowing people to fill in and edit their own vaccination information online was to help the SSM track the inoculation history of residents who did not receive their first jabs in Macau, Tai explained.
Prior to the incident, the SSM had already identified a certain degree of risk in allowing users to modify their own records. However, authorities did not make any amendments because the operation was working well at that stage, he added.
Tai urged locals to pay more heed to the locations of the inoculation sites where they had registered for their upcoming second doses, stressing that Macau has only three centers to carry out the inoculation of BioNTech-produced mRNA vaccines. The other centers will be reserved for the Sinopharm-manufactured vaccines.
Noting the location where they received their first inoculation may help residents to easily distinguish which vaccine they received in order to avoid confusion, he suggested.
Regarding the case of a 77-year-old local resident who evaded quarantine measures and vacated the Pousada Marina Infante Hotel on April 9, the individual was captured 10 hours after his escape in the lobby of a building around Rua do Campo, Ma Chio Hong, head of the Division of Operation and Communications of the Public Security Police Force (PSP), told the press yesterday.
According to official information, the male was placed under mandatory quarantine upon his return to Macau after an earlier attempt to enter Hong Kong. Apparently he refused to undergo quarantine in Hong Kong when he arrived at the Hong Kong border at the Hong Kong-Zhuhai-Macau Bridge.
The man had previously claimed that he did not enter Hong Kong and therefore should not be put under quarantine in Macau. It is believed that this is the reason he did not want to stay and why he later escaped the quarantine hotel, Leong Iek Hou, coordinator at the Center for Disease Control and Prevention (CDC), said.
However, Leong said that the man stayed at the Hong Kong border for some time and had contact with local people there. Consequently, he must undergo medical observation as well.
The representative of the Macao Government Tourism Office (MGTO), Lau Fong Chi, stated that authorities have stepped up efforts to avoid similar incidents from happening again.
These measures include strengthening the patrolling service inside and outside the quarantine facility to ensure that no one can escape via the fire emergency exit again. They will also relocate the surveillance positions of each security guard on every hotel floor to cover as many as possible of the blind spots that were missed before, Lau said.

As of 4 p.m. yesterday, a total of 69,149 vaccine doses were administered in Macau. Of this figure, 58,931 were Sinopharm-manufactured inactivated vaccines, constituting around 85% of total doses taken. The remainder, 10,218, or 15% of the total share, were BioNTech-produced mRNA vaccines, Dr. Tai Wa Hou, coordinator of the Health Bureau’s Covid-19 Vaccination Operation, said yesterday.