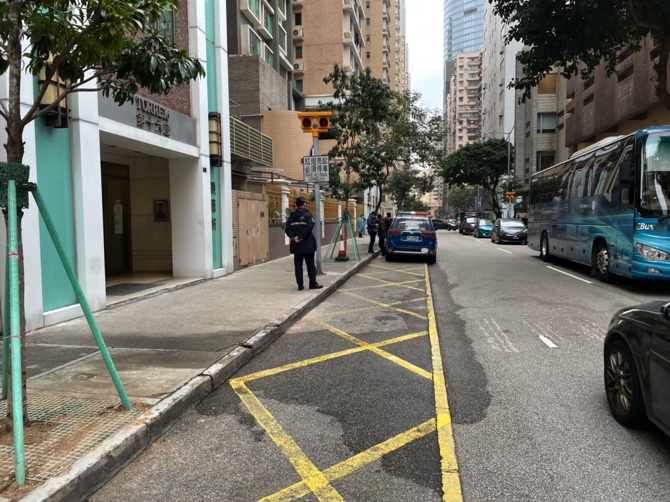 Almost 3,000 people living, working, or studying in Macau are being tracked to various degrees after a confirmed Covid-19 case was registered in Tanzhou, a town in the prefecture-level city of Zhongshan in Guangdong province. The number was confirmed by the Health Bureau (SSM) yesterday during the Novel Coronavirus Response and Coordination Center (Center) weekly press briefing.

During the briefing, the director of the SSM Alvis Lo noted the significance of this case due to the town’s close proximity to the Macau border (around 10 km). He also noted the many links between Macau residents and the town, located roughly the same distance from Border Gate as the southern coast of Coloane Island.

According to Lo, following reports from the Zhuhai authorities, the SSM immediately initiated contact tracing and the implementation of containment measures. Through the analysis of health code data, they found that a total of 2,898 people had been in the town over the last two days, and another 18 people were reportedly within the residential area where the case was found.

“All those who have been in this residential area in Tanzhou (18 people) will be subject to a medical observation in quarantine of 14-days. The remaining people, who have only been in [other districts of] the town, will be subject to a seven-day quarantine plus seven days of health self-management. They will also be subjected to five nucleic acid tests (NAT) during this period,” SSM head said.

Lo also confirmed information given yesterday to the Times as breaking news. From today all border-crossings, except those via the airport, require the presentation of a negative NAT result taken within the previous 48 hours. This represents an extension of the previous the validity period of seven days. Nevertheless, the seven-day period remains for those arriving by plane.

At the same briefing, Lo also announced that two people in Macau have been confirmed to be primary contacts of the patient in Tanzhou and have been put under medical observation in isolation.

These cases include a 45-year-old male, a non-resident caretaker at the Caritas aged-care home “Lar Sol Nascente” in the Areia Preta district.

According to information provided by the Coordinator of the Center Leong Iek Hou, the man lives at Areia Preta district and attended a banquet hosted in Tanzhou on January 9.

His initial NAT result was negative but he was nonetheless placed in isolation. Health authorities are also following up on 11 individuals who share a residence with this man, as well as another 134 people who were in close contact with him at his place of work. All 145 secondary contacts have been placed under medical observation in quarantine.

The second case is a 59-year-old female local resident who works as an assistant at the Fong Chong (Taipa) Nursery.

According to Leong, she lives in the Lake Building in Taipa, and she also took part in the same banquet hosted on January 9.

A second individual with whom she lives has also been put under observation, along with 38 children from the nursery and 43 of her co-workers.

Like the 45-year-old male, the cohabitee initially NAT returned a negative result. Lo remarked that, since they are close contacts, the health authorities are taking extra care.

The SSM director also noted that added precautions are being taken into account regarding the secondary contacts, as “they [include] young children and elderly people, both considered risk groups [either because] they can’t be vaccinated (the young children) or because they belong to the group with the lowest vaccination rate in Macau (the elderly).”

Figures cited by Lo record that the vaccination rate among elderly people living in their own homes in Macau stands at only 30%.

According to Lo, as of 4:30 p.m. yesterday, almost 2,000 of the network of 3,000 people considered primary or secondary contacts have already undergone their first test. Authorities are hopeful that the remainder will have had their first test today.

The health authorities also explained that one of the reasons for the heightened precautions is that mainland authorities have not yet ascertained the source of the infection in Tanzhou.

“Only after the mass testing that is being conducted in some areas in Zhuhai can we ascertain the real risk for Macau. We are assessing this at the moment,” Lo confirmed.

No decision made on class suspension

The representative from the Education and Youth Development Bureau (DSEDJ) Wong Ka Kei affirmed that no decision has been made as yet regarding the need for class suspensions or the enforcement of online classes. “We are communicating with SSM and in close contact with the education sector to see if there is a need or not to suspend classes,” the official said.Wong also noted that, according to information gathered by the local authorities, there are about 500 students that are still in Tanzhou, unable to return to Macau due to the outbreak in the area.

According to the official, the DSEDJ is also coordinating efforts with educational institutions at every level for the placement of QR codes for students and school staff to scan using the Macau Health Code app, in order to facilitate tracing of any potential contacts.