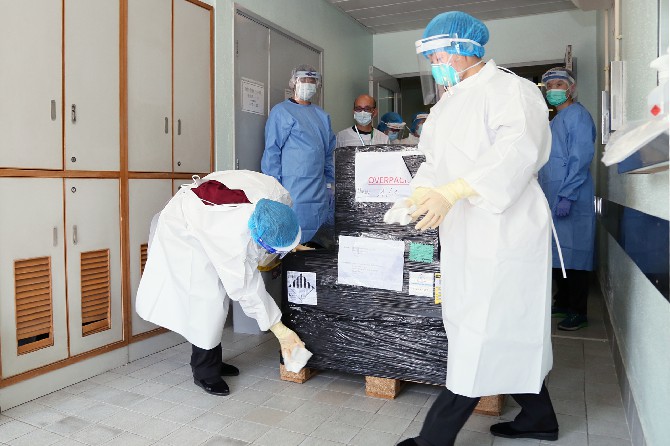 The third batch of 29,250 doses of BioNTech vaccines arrived in Macau yesterday after being transported from Germany via Hong Kong, according to a statement issued by the Novel Coronavirus Response and Coordination Centre.
Upon the vaccines’ arrival, the Health Bureau will conduct a “detailed test,” and only start to use the batch after it is qualified.
According to the center, medical staff will strictly follow procedures to conduct a detailed inspection before each vial of vaccine is used to ensure that there are no abnormalities.
Last month, the health authority suspended inoculation using such vaccines due to packaging defects which are likely to have been caused by environmental factors across the course of the delivery process from Germany to Macau.
The remaining 90,000 doses of the first batch of mRNA vaccines will continue to be stored until the manufacturer makes a final investigation report. The second and third batches of 48,750 doses of mRNA vaccines will be valid until August this year.
In order to reduce the waste caused by the expiration of vaccines, the authorities have negotiated with manufacturers to import them into Macau in multiple phases and small quantities. In addition, a total of about 4,000 doses from the second and third batch of mRNA vaccines have been used so far, and no problems have been found at this stage, the center said.
The three vaccination stations for the mRNA vaccine can provide 900 inoculations per day.
As of 4 p.m. yesterday, a total of 123,655 people had made appointments for the vaccination. Among them, a total of 71,196 people have been vaccinated, of which 46,732 people have received the first dose of vaccine, and 24,464 have received two doses of vaccination.
The center continuously calls on residents to receive Covid-19 jabs in an attempt to reach herd immunity.