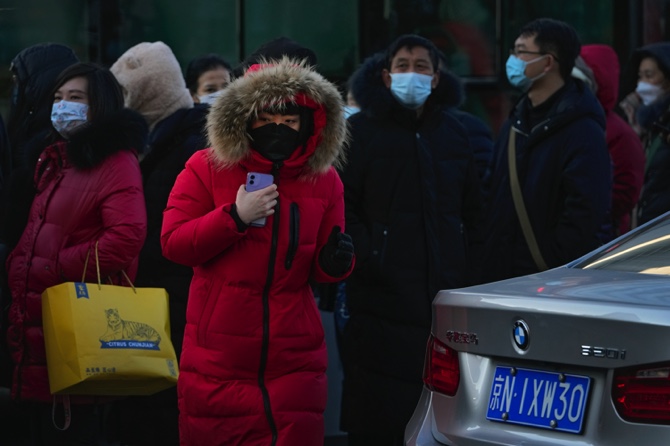 State broadcaster CCTV said the government has divided Tianjin and its 14 million residents into three levels of restrictions, starting with lockdown areas where people are not allowed to leave their homes at all.

In control areas, each household is allowed to have one family member leave to buy groceries every other day, while in prevention areas, people must remain inside their immediate neighborhoods.

Buses and trains from Tianjin to Beijing have been suspended and people are being told not to leave the city unless they have pressing business.

The city began mass testing of all its residents on Sunday after a cluster of 20 children and adults tested positive for COVID-19, including at least two with the omicron variant. Another 20 people tested positive on Sunday, bringing the total to 40. Officials said earlier that the virus has been circulating so the number of cases could rise.

China has stepped up its strict zero tolerance strategy in the runup to the Olympics, which open Feb. 4. The Chinese capital is 115 kilometers northwest of Tianjin and many people regularly travel back and forth by car or on a high-speed rail link that takes less than one hour.

Elsewhere, millions of people are being confined to their homes in Xi’an and Yuzhou, two cities that are farther away but have larger outbreaks traced to the delta variant. Residents of Xi’an have been under lockdown for more than two weeks, but the number of new cases in the city of 13 million fell to just 15 yesterday in a sign that restrictions could soon be lifted. Yuzhou is a city of about 1.1 million people in neighboring Henan province.

Another 60 cases were reported yesterday in Henan, two of them of the omicron variant, found in the city of Anyang and apparently brought from Tianjin by a college student on Dec. 28, state media outlet The Paper reported. The provincial capital of Zhengzhou has been conducting mass testing and closed its schools. Another 24 cases were reported in the city yesterday.

The first two cases confirmed in Tianjin were a 10-year-old girl and a 29-year-old woman working at an after-school center. Both were infected by the omicron variant. In subsequent testing of close contacts, 18 others tested positive and 767 tested negative as of Saturday night. MDT/AP