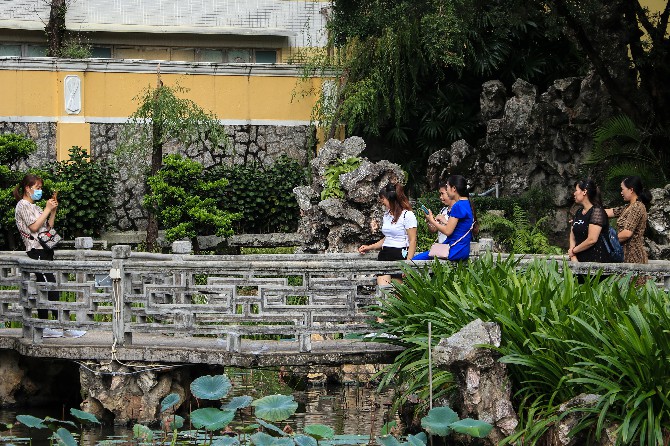 From tomorrow (April 9), the Covid-19 vaccination plan established by the local health authorities will include all stranded workers as well as family members of non-resident workers (TNRs), the coordinator of Vaccination Plan, Tai Wah Hou, announced yesterday at the weekly Covid-19 press briefing.
According to Tai, the extended plan also includes all students in Macau, regardless of their residency status.
Expanding upon the details of the plan, Tai said that from 9 a.m., April 9, it will be possible for people in these categories to schedule their vaccination for as early as the next day (April 10) if they choose to be vaccinated with the Sinopharm vaccine and as early as Monday (April 12) if they opt for the mRNA vaccine, produced by BioNTech.
Tai noted that residence in Macau for at least three months in the last half-year would be a further condition of inoculation.
For all students, access to the vaccines will be free of charge, while stranded TNRs and family members of TNRs will have to pay as much as 500 patacas for the two doses of the vaccine, Tai explained in a reply to a question from the media.
The measure solves a problem that has arisen since the central government’s requirement that, to get a visa to enter the mainland, foreign workers would have to first be vaccinated with the Sinopharm vaccine. This condition was impossible to meet because most of the stranded workers were former TNRs that had their permits (blue cards) canceled or expired and so had lost TNR status, ultimately denying them access to all vaccines.
This issue had been raised several times since the central government authorities revealed the condition, which has turned out to be incompatible with the new law for the hiring of TNRs. This law, in force since October last year, states that to be hired as a TNR, the person needs to be outside Macau when the employer makes the application, and enter Macau only after such a request is approved by the immigration authorities.
Several lawmakers raised the issue at the Legislative Assembly last week, calling on the Secretary for Economy and Finance, Lei Wai Nong, to find a solution for the problem: a problem that, in the opinion of many lawmakers, was created as a result of the new law concerning the hiring of TNRs not considering exceptional cases.
Avoiding such controversy, however, Tai only referred to this new vaccination measure as a way to effectively protect society and increase the vaccination rate which, according to health authorities, is still much lower than the current target to date of about 6% of the population.
Tai also added that until 4 p.m. yesterday, a total of 108,000 people had booked to take vaccines, while 58,600 had already been vaccinated.
The coordinator also noted, “We have currently 12 vaccination posts active which have a daily capacity of inoculation of 5,000 vaccines. At the moment, the average vaccination rate is a thousand inoculations per day, which leaves us with a lot of room to expand the vaccination plan to these new groups.”
Also replying to a media question, the coordinator of Macau’s Center for Disease Control, Leong Iek Hou, added that adjustments were made to the vaccine scheduling platform to accept documents from the stranded TNRs and their families. Instructions on which document to submit would also be supplied for each category of persons.

A total of 17,559 people have already received the two doses that comprise the Covid-19 vaccination plan, the Coordinator of Vaccination Plan, Tai Wah Hou said yesterday in reply to a media question during the weekly health authority’s press briefing.
According to Tai, from the total figure, 16,442 have received two doses of the Sinopharm vaccine, while 1,117 have received the vaccination for the BioNTech vaccine.
The official also added that another 41,000 people have received the first dose of the vaccine and are currently waiting for the right period of time before the second dose.